Review: Tom Gates Is Absolutely Fantastic (at some things) by Liz Pichen 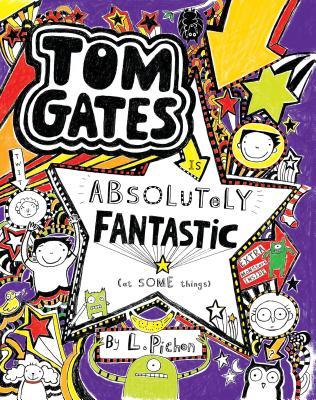 
What could be better (or worse) than a class trip? Tom's about to find out in this fifth wicked diary from his award-winning series.
Since Tom forgets everything, it's not surprising that he forgot all about the trip he's supposed to go on with class 5F. It's good that his family helps keep him on track (even, once in a while, his grumpy sister, Delia)! Luckily, there are loads of excellent things to do on the trip, like making rafts, eating snacks, and seeing some very weird creatures. That is, as long as Tom doesn't get stuck in a group with anyone who snores or worse (looking at you, Marcus Meldrew!).

With random thoughts in the ridiculousness of every day adventure, this is a fun tale with tons of illustrations and zest.

Tom forgot to get his form filled out for the three day school trip, but with everything going on in his life, that isn't surprising. His sister, Delia, is a pain, his grandparents sweet but odd, and his own parents...well, let's not even go there. The daily school drama doesn't help things either. But after a lot of effort and even more forgetting, he finally gets his form in and snags a spot thanks to a cancellation. But once the bus is underway, he's in for anything but a boring adventure.

While a few nice messages are wrapped up in this tale, the book centers around one thing—silly fun. Tom is pretty normal for his age, and his mind wanders everywhere but in the responsible direction. He's a nice guy and simply tries to get through the chaos called life as best he can, which makes him easy to relate to. The situations he runs into come from daily life and reflect those which average kids will face. And while all of it seems dramatic at times, it's Tom's very honest, uncensored thoughts, which make it a hilarious read.

This is not a fast-paced book into adventure, but rather humor with spice. It takes a heavy several chapters before Tom's trip gets underway but anticipation is always half the fun. The author brings even the smallest things into a new light thanks to Tom, one that ensures giggles and chuckles. After all, many kids have the exact same thoughts even if they don't say it.

Of course, the heaps and mounds of small and large doodles and illustrations are probably the key factor in these pages. Not a sentence goes by without a funny, scribbled edition...one that adds snorts and giggles along the way. The book might seem thick, but it's perfect for reluctant readers who aren't thrilled by seas of words. The story is there, and it is funny, but without these doodles, it wouldn't be anything exceptionally special.

I recommend this book to especially middle grade boys who love a little fun because they will definitely find it here.
on December 29, 2018