Review: Things That Go Bump in the Night by Andrew Buckley 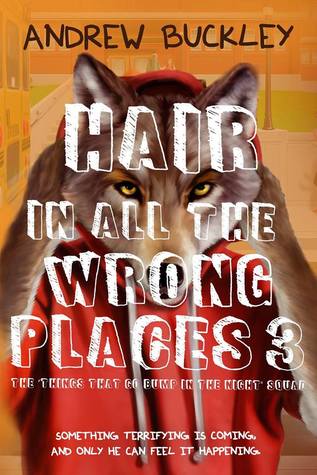 THINGS THAT GO BUMP IN THE NIGHT
Hair in All the Wrong Places, Book 3
by Andrew Buckley
Month9Books
YA Paranormal
237 pages

A menacing shadow looms over Elkwood, as a dark and sinister evil creeps into town. Only Colin Strauss can feel it happening. He is a werewolf, after all.
A routine Night Watch mission ends with Colin rescuing a mysterious girl from monster hunters, causing shock waves threatening to rock the town of Elkwood to its very foundations. Just when Colin thinks things can’t get any worse, he starts having girl problems.
If anyone is up to the task, it’s Colin. In the past year, he’s faced an evil biology teacher, defeated a power-hungry wizard, and united a group of unlikely creatures and freaks to defend their home.
Can Colin defeat the growing evil, evade ancient monster hunters, and not mess things up with his sort-of girlfriend?
Having hair in all the wrong places is fast becoming the least of Colin’s problems . . .

What a fun read! But then, I enjoyed the first two books in the series as well.

Colin has this werewolf thing pretty well under control and is a member of an elite force of other 'freaks', who stop supernatural creatures. But when a mission ends at a group of Hunters, who are holding a strange girl prisoner, things start running out of control. Add the temper of his powerful Grandma, the bumps of teenage romance, more dangerous monsters, and an ancient evil group no one seems to know much about, and Colin's days are anything but boring.

The relaxed and fun style of writing draws in so naturally, that it's hard not to feel at home in the story right away. Colin is a great guy. He's only fourteen, so he has a lot to learn...especially as a new werewolf with growing powers even his werewolf mentor has never seen. There's school drama, a dash of every day teenage life, and a ton of paranormal weirdness. And Colin takes it all in stride, more or less. It's an easy, fun read which simply insures a great adventure.

There's never a boring moment, but with everything going on, that's not surprising. The creatures are dangerous, yet hold a bit of humor too. It's a nice balance of action and lightness. To add to the fun, layers of mystery make it impossible to guess the outcome, and when a few things are a little predictable, they still include an interesting twist. The story definitely builds into more than first hits in the first pages, promising a huge adventure still to come.

Fans of young adult paranormal creatures, quirky action, teenage life and a boy, who's doing his best to stay on top of it all, will enjoy this read.
on December 12, 2018

Email ThisBlogThis!Share to TwitterShare to FacebookShare to Pinterest
Labels: Andrew Buckley, Hair in All the Wrong Places, Things That Go Bump in the Night