Review: The Squirrel Manifesto by Ric Edelman and Jean Edelman 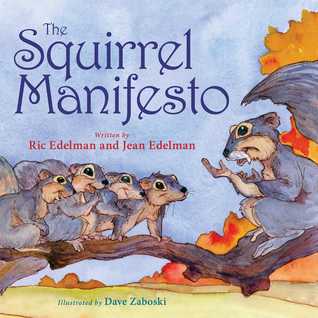 
From acclaimed and award-winning financial adviser Ric Edelman comes a modern-day fable in the spirit of The Ant and the Grasshopper that teaches kids—and their parents—the value of spending money, saving for the future, and giving to charity.
Financial habits form early. Children learn by observing a parent’s behavior and through their own experiences. That’s why it’s important to make sure your children are treating money the right way. From allowances and birthday money to cash they’ll one day earn babysitting or mowing lawns, The Squirrel Manifesto provides a platform to set your children on the path to a lifetime of fiscal responsibility.
Just as a squirrel gathers nuts to prepare for the winter—eating some now and storing some for later—kids can learn the value of money by spending some of their allowance now and saving the rest for later using animals as examples.

Diving into the beauty of the forest, this book takes a look at a lively, playful and yet, productive bunch.

My favorite part of this book are the illustrations. Done in aquarelle, there's a beautiful, artistic flair which brings the colors of the forest across wonderfully. It's a joy to flip through these, watch the animals bouncing around and enjoy the activity.

There is a theme to this book, obviously, but it doesn't come across as forcefully as I feared it might. The first third or so of the pages allows the reader to sink into the forest life. First, about halfway through, does the idea of collecting, spending and giving come into play. The author does a nice job or letting it flow into the lively day and fun of squirrels being squirrels. There is some saving and the manifesto, but by no means is the joy of living and having fun forgotten.

The entire thing is written in rhyme and holds only a few lines per page. The vocabulary isn't necessarily the best for the youngest readers, and there are a few hints and mentions which might go over even slightly older readers' heads. Adults will find a chuckle or two, though. But as a story, it didn't flow as well as it could have and receives its marks because the message does flow well and makes a point young readers understand. This isn't a book to pick up as a bedtime read for entertainment...although a gentle and lovely peek into the forest definitely is there. Rather, it's a nice way to teach kids a little about saving and a way to divide their earnings in their lives which makes sense.

For thirty years, Ric Edelman has worked to teach everyday people about persona finance. He's widely regarded as one of the nation's top financial advisors, having been ranked #11 on the 2017 list of the nation's Top Wealth Advisors by Forbes. He was previously ranked the nation's #1 Independent Financial Advisor three times by Barron's. Ric is the 2017 recipient of the IARFC's Loren Dunton Memorial Award for Lifetime Achievement for his "substantial contribution to the financial services profession and the financial interests of the public." He is an inductee of Research magazine's Financial advisor Hall of Fame, and has been named among the "15 most transformative people in the industry" by Investment News and one of the investment advisory field's "10 most influential figures" by RIABiz. Ric is also #1 New York Times bestselling author who has written nine books on personal finance. His most recent, The Truth About You Future, was published in March 2017. You can visit him at RicEdelman.com