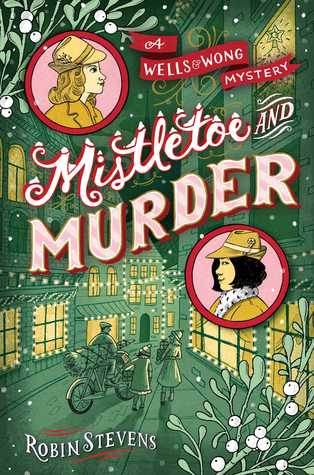 Hazel and Daisy trade mistletoe for a murder investigation and set out to save the day (Christmas Day that is!) in this fabulously festive fifth novel of the Wells & Wong Mystery series.

Daisy Wells and Hazel Wong are spending the Christmas holidays in snowy Cambridge. Hazel is looking forward to a calm vacation among the beautiful spires, cozy libraries, and inviting tea-rooms.

But there is danger lurking in the dark stairwells of ancient Maudlin College and two days before Christmas, there is a terrible accident. At least, it appears to be an accident—until the Detective Society looks a little closer, and realizes a murder has taken place. Faced with several irritating grown-ups and fierce competition from a rival agency, they must use all their cunning and courage if they’re going to find the killer before Christmas dinner.

What a wonderful mystery! This is the first book that I've read from the series, and although there are references to the occurrences in the earlier books, it was absolutely no problem to start with this one. While it is set during Christmas, it is by no means a book which needs to be read only during the holidays.

Daisy and Hazel are excited to spend Christmas break in Cambridge. While Cambridge itself is gorgeous, the woman's college (since the colleges were still separated at this time) is lacking in financial luster. Still, Daisy and Hazel are free to roam as they want, since the person looking after them is constantly studying and writing essays. While visiting Daisy's brother, they learn of strange accidents haunting especially one of a set of twins who is about to inherit the entire family estate. The other twin will receive nothing. The two girls decide to solve the case behind these accidents but are soon met by their friends and competing detectives who want to do the same. The bet is on—who can solve the case before Christmas. But before either side can collect all of the clues, the situation takes a turn for the worse and soon becomes a murder mystery.

Set back to an earlier time in Britain, this tale has a lovely flair the entire way through. Daisy and Hazel are around fifteen years old and completely fit their parts. They are a lovely duo, who understand each other very well, have different personalities, and support each other no matter what. The fact that Hazel is Chinese puts an interesting twist into the story in so far that this was something very exotic back then. And it fits her character so nicely!

There's a wonderful mixture of suspense, humor and terrific dialogue. Every thought and word sits, while adding a little zest of personality. Something is always happening, and it's impossible to predict where the story will go next. The clues unfold little by little. The girls love to recap periodically with 'written' notes, which helps keep the reader up to point.

There is some violence...after all it is a murder mystery...but it stays within taste. The girls' reactions are logical and never over the top. But they are good detectives. There is romance too, but this skirts along the side as a simple dusting without real grit.

This is a wonderful read for younger (and even much older) young adult mystery fans. Especially girls will enjoy diving into this one and will probably be hooked on the entire series right away.

Robin Stevens was born in California and grew up in Oxford, England, across the road from the house where Alice of Alice in Wonderland lived. Robin has been making up stories all her life. She spent her teenage years at boarding school, reading a lot of murder mysteries and hoping that she'd get the chance to do some detecting herself (she didn't). She studied crime fiction in college and then worked in children's publishing. Robin now lives in London with her pet bearded dragon, Watson.
on December 20, 2018