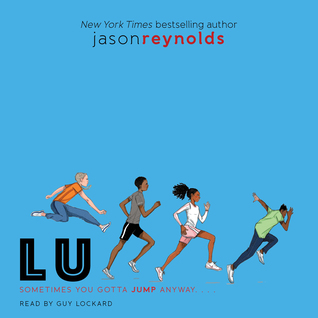 Lu must learn to leave his ego on the sidelines if he wants to finally connect with others in the climax to the New York Times bestselling and award-winning Track series from Jason Reynolds.
Lu was born to be cocaptain of the Defenders. Well, actually, he was born albino, but that’s got nothing to do with being a track star. Lu has swagger, plus the talent to back it up, and with all that—not to mention the gold chains and diamond earrings—no one’s gonna outshine him.
Lu knows he can lead Ghost, Patina, Sunny, and the team to victory at the championships, but it might not be as easy as it seems. Suddenly, there are hurdles in Lu’s way—literally and not-so-literally—and Lu needs to figure out, fast, what winning the gold really means.
Expect the unexpected in this final event in Jason Reynold’s award-winning and bestselling Track series.


I've read some of the other books in this series, and while it's not necessary to read them in a certain order (each works fairly well as a stand-alone), it does make for a more rounded read to have the background information from the books before diving into this one.

Lu is co-captain of the track team, the Defenders, and as so, at constant rub with the captain. But he takes everything more or less in stride. He also is an albino, which has caused problems in the past but has nothing to do with track. Add his diamond earrings and gold chains, and he isn't the shabbiest kid on the team. Plus, he runs well. At least, until it's time for him to run hurdles. Fear holds him back, but soon he learns that the physical hurdles on the track aren't the only thing he's going to have to learn to get past.

This is an easy read centered as much around Lu's family and social life as it is around track. There aren't any huge moments, but rather, a line of difficulties that force him to grow as a person and realign what the real important things are in his life. He does run track, and while his heart is in running, this story focuses more on the other aspects of Lu's life. None of which are earth-shattering, but problems which readers can relate to.

Lu has some fears to overcome, but learns that the people around him have their own hurdles to jump too. Some have made it, others are still struggling, and others will never get past them. It's a strong life lesson, but one that is wrapped up in an entertaining and, at times, thoughtful read.

Lu's family sits strong in these pages, one that is more supportive than the families in the books before. His mother especially holds lots of character, and adds a nice flair of fun and humor to the mix. The relationship with the parents is an inspiration while not leaving the realm of reality. It makes for a read, kids will easily see themselves in. And the message, while clear, is subtle in its own way. As to the end of the book—the last twist holds a surprise which allows those warm fuzzy feelings to remain long after the book is closed.

This is a wonderful addition to a lovely series.

Jason Reynolds is a New York Times bestselling author, a Newbery Award Honoree, a Printz Award Honoree, national Book Award Honoree, a Kirkus Award winner, a two time Walter Dean Myers Award winner, an NAACP Image Award Winner, and the recipient of multiple Coretta Scott King honors. The American Booksellers Association's 2017 spokesperson for Indies First, his many books include When I was the Greatest, Boy in the Black Suit, All American Boys (cowritten with Brendan Kiely), As Brave as You, For Every One, the Track series (Ghost, Patina, Sunny, and Lu), and Long Way Down, which recieved both a Newbery Honor and a Printz Honor. He lives in Washington, DC. You can find his ramblings at JasonWritesBooks.com.