Review: Charlie Hernandez & The League of Shadows by Ryan Calejo 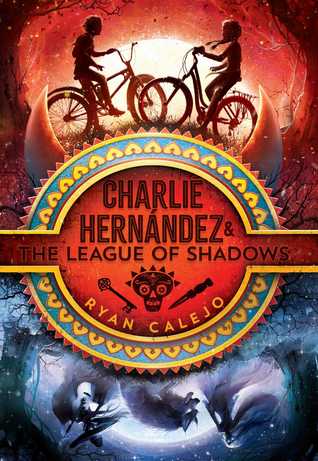 
The Lightning Thief meets the Story Thieves series in this middle grade fantasy inspired by Hispanic folklore, legends, and myths from the Iberian Peninsula and Central and South America.
Charlie Hernández has always been proud of his Latin American heritage. He loves the culture, the art, and especially the myths. Thanks to his abuela’s stories, Charlie possesses an almost encyclopedic knowledge of the monsters and ghouls who have spent the last five hundred years haunting the imaginations of children all across the Iberian Peninsula, as well as Central and South America. And even though his grandmother sometimes hinted that the tales might be more than mere myth, Charlie’s always been a pragmatist. Even barely out of diapers, he knew the stories were just make-believe—nothing more than intricately woven fables meant to keep little kids from misbehaving.
But when Charlie begins to experience freaky bodily manifestations—ones all too similar to those described by his grandma in his favorite legend—he is suddenly swept up in a world where the mythical beings he’s spent his entire life hearing about seem to be walking straight out of the pages of Hispanic folklore and into his life. And even stranger, they seem to know more about him than he knows about himself.
Soon, Charlie finds himself in the middle of an ancient battle between La Liga, a secret society of legendary mythological beings sworn to protect the Land of the Living, and La Mano Negra (a.k.a. the Black Hand), a cabal of evil spirits determined to rule mankind. With only the help of his lifelong crush, Violet Rey, and his grandmother’s stories to guide him, Charlie must navigate a world where monsters and brujas rule and things he couldn’t possibly imagine go bump in the night. That is, if he has any hope of discovering what’s happening to him and saving his missing parents (oh, and maybe even the world).
No pressure, muchacho.


With fast-paced adventure, this book steers through Central and South American myths in an exciting and fun frenzy.

Charlie is a middle-schooler, who was normal until his house burnt down and his parents disappeared. A couple of months later, and living in a foster home, his life gets really strange. Horns grow out of his head, feathers burst from his chest, and even more. If it wasn't for a sudden new friend, Violet, he might think he's loosing it. Her instincts as an investigative reporter have her more than willing to help him figure out what's happening and maybe, what happened to his parents. But neither of them expected to run face-to-face with practically every mythical creature Charlie's grandmother once taught him about. And most of them are not exactly friendly.

This is a whirl-wind adventure. The beginning reminds a bit of the Goonies but quickly steers into an extremely fast-paced adventure, reminding a bit of Rick Riordan's tales. Except in these pages, there is little time to catch a breath. Once the creatures start to appear, Charlie runs into one after another. The danger and tension fly nonstop as he and Violet try their best to figure out what is happening.

The story heads in the prophecy direction when it comes to Charlie, but it does take an interesting twist with the mounds of myths tossed in. For anyone not familiar with the myths, it's definitely a learning experience and opens up to the richness of these cultures. It also feels like jumping into cold water. With every new creature, the author builds in a very short summary to give the reader a quick glimpse behind the corresponding tale since many readers probably won't necessarily be familiar with them. But there are a lot of different myths built it. The creatures hit rapid fire, and while this definitely keeps the pace high, some pass by with a blink before the next one already swoops in. In any case, it is an exciting read that is sure to hold until the very last page.

Charlie and Violet make a wonderful duo, balancing each other with very different personalities. Charlie has the myth knowledge but is in a little over his head. Still, he does what needs to be done and reacts pretty well on his feet. Violet is gung-ho and more than ready to dive into any situation. Still, she keeps a good head on her shoulders and knows when to stop. The middle-schoolers do act a bit old for their age at times, but it reels back in during other scenes to keep it believable. Either way, it's fun and easy to root for Charlie and Violet until the very last page.

This is a fun adventure for action fans, and those who love reading tales of all those things hiding in the shadows. The myths are interesting and definitely an extra treat.

Ryan Calejo was born and raised in south Florida. He teaches swimming to elementary school students, chess to middle school students, and writing to high school students. Having been born into a family of immigrants and growing up in the so-called 'Capital of Latin America', Ryan knows the importance of diversity in our communities and is passionate about writing books that children of all ethnicities can relate to. Charlie Hernandez & the League of Shadows is his first novel.
on December 18, 2018