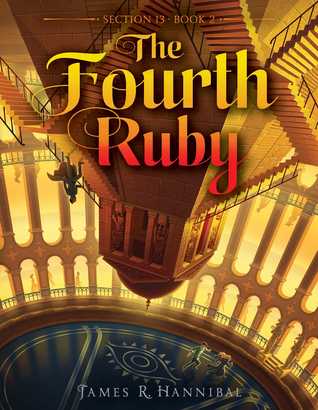 Jack and Gwen are back in this dynamic follow-up to The Lost Property Office.The chase to recover some of the Crown Jewels, specifically the infamous cursed ruby named for Edward the Black Prince, son of King Edward III, leads Jack and Gwen deep into the strange world of tunnels, cathedrals, and river systems beneath London to find the Thieves Guild, then back along the jewel’s journey through the royal houses of Europe to its origin at a forgotten mine in India.

Although I didn't read the first book in this series and had little trouble settling into the story with this second tale, I would highly recommend starting the series at the beginning.

Packed with fast-paced adventure, interesting twists and magic around every corner, this story reminds a bit of Harry Potter while carrying more tension and a tiny dash of steampunk atmosphere.

Jack Buckles is training to be a Tracker, but being a section 13 still hangs on him like a layer of stinky, sticky goo. To make matters worse, he's afraid his powers aren't working quite right—something he's trying to hide. When his professor wants to meet him, the situation rocks into chaos and Jack finds himself as the main suspect in the theft of the Crown Jewels. Jack must prove his innocence before he's captured by authorities but ends up in the middle of something larger than he might be able to handle.

From the first page, a rich world opens up and sucks the reader in. The author melds character sympathy, world building and tension into a perfect balance from the very first chapter. Mystery hits right away in a curious, unsolved event, and then leads right into Jack's first problematic situation—one which shows his determination and frustration, making him a character easy to identify with and root for. He's an underdog thanks to his past, much he couldn't do anything about and isn't his fault, but luckily, pity doesn't cling too thick. He does what he has to do, no matter what the villains bring against him—and what horribly evil villains these are!

The adventure is fast, exciting and constantly hits with explosions, near escapes and tension pure. But the author also builds in clever twists and turns, which enrich the mystery and intrigue. The puzzles and riddles mix in nicely with magic and intrigue. Add the morsels of pure fantasy like buildings with gravity sometimes up and sometimes down, and it's simply a fun read.

Summed up, this is a wonderful series for fantasy friends who love non-stop adventure and action, but enjoy a magical world full richness and clever innovations throw in. At 400 + pages, it might seem like a heavy read, but the tale grabs up and guarantees excitement the whole way through.

James R. Hannibal is no stranger to deep dark secrets or hunting bad guys, having served in US Air Force as stealth bomber pilot and a Predator mission commander. Like Jack Buckles, James "suffers' from synesthesia, an intersection of the senses that was once considered mental illness and often causes hyperobservance. If you bake him a cake, he might tell you that it smells blue and sticky—and you should take it as a compliment. He is also the award-winning author of adult military thrillers.