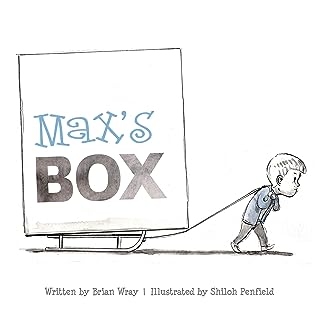 Max's parents give him a very special gift: a tiny, magical box that will hold everything, from his toys to his feelings. Max learns, however, that feelings can't be put away as easily as toys. Each negative emotion he feels--anger, embarrassment, sadness, loneliness--gets added to the box, which grows and grows. Eventually it is so large that it keeps him from doing what he loves, like riding his bike and climbing trees. With some help from his friends and family, Max is able to turn the box into something beautiful and let it go. A parents' guide explains how well-intentioned adults often encourage children, especially young boys, to ignore and "put away" their feelings instead of learning to fully live with them. This simple but powerful story not only teaches children how to "control" their emotions but discourages suppressing them, the illustrations becoming more colorful and vibrant as Max moves out from his box's shadow.

Using an almost metaphorical example...which isn't one at all... this tale takes a new twist on emotions and how kids can deal with them.

Max gets a box from his parents, one that he can put all sorts of things in. And even better, it grows bigger to fit anything he could possibly want to put inside. Then, he tries something different. When a situations makes him feel bad, he stuffs this emotion into the box. Soon, he stuffs every negative emotion inside, and the box grows bigger and bigger. At one point, the box is so big that he can't take part in any fun things with his friends.

This is a story which should help kids learn how bad it can be to stuff emotions inside and not let them out. The story starts out simple and cute as Max simply puts normal toys into the box. As it slides into a more imaginative direction, it's clear what's happening. And Max always has this growing box in tow. It's a visual young listeners will be able to identify with, and the freeing effect at the end offers inspiration...but not without a little help. While there is a good message at the end, I found it came across a little unclear and had to be explained before the kids got it.

The illustrations are simple and fun to look at. They depict each situation nicely allowing the reality of pulling a huge box along to come across very clearly.

At the end of the book, the authors adds more advice and explanation concerning the problem children and might have with their emotions and how to use this book.