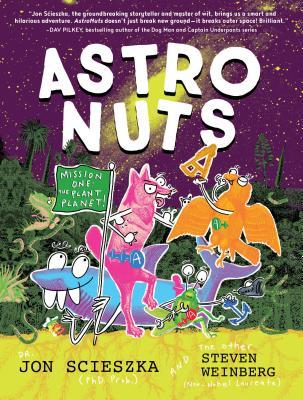 
AstroWolf, LaserShark, SmartHawk, and StinkBug are animals that have been hybridized to find other planets for humans to live on once we've ruined Earth. So off they rocket to the Plant Planet! Will that planet support human life? Or do Plant Planet's inhabitants have a more sinister plan?

The astronuts are a very, very, very well kept secret of the NNASA (Not-NASA) and are kept hidden in a nose on Mount Rushmore. When the Earth has reached its limits thanks to global warning, these four very strange and unique creatures are sent into space on a mission to find a new home for humans. They have two weeks, which might seem tight, but they run into a possible planet right away. However, things may not be as friendly as they seem on this planet.

There isn't much of an introduction in this book. Rather, the adventure begins right away as the four astronuts launch from a stone nose into space on their mission to save the world. Information surrounding these creatures is kept very skim and only dribbled in as needed...which causes a little confusion but, on the other hand keeps action high for those with very short attention spans.

The entire book has the atmosphere of a comic explosion gone madly array. There is a plot. Of sorts, but humor is kept on center stage. Quirky humor, which bounces all over the place. There might be 220 pages, but by no means is this a heavy read. The text is sometimes more, sometimes almost non-existent. In any case, reluctant readers won't be scared away. It's the type of humor which is going to determine if a reader enjoys this one or not. I don't think it's for everybody, but those kids who do find it funny will be laughing their heads off.

The illustrations are bright and bold and carry the same quirky, over-the-top feel as the rest of the book. It's definitely never boring. As an extra side-note, the illustrator explains on the very last pages how he used real works found in museums and such to piece together some of the scenes in a collage. It's definitely an extra tidbit for art lovers.

Lastly, this is a book on a mission. The entire story evolves around the basic theory that the Earth has been ruined by man's pollution. Global warming hits front and center, and is presented through a moment of a bit more scientific explanation...or in that direction. The basics of what a planet requires to ensure life as we know it exists also runs along with the tale, giving kids a deeper insight on that end of things. So yes, there is science as well or, at least, something in that direction.

In any case, this is an unique read which is great for reluctant readers who enjoy quirky humor and an exciting, never-ever boring, space adventure.

Jon Scieszka is best known for his bestselling picture books, including The True story of the Three Little Pigs! and The Stinky Cheese Man. He is also the founder of guysread.com and a champion force behind guyslisten.com, and was the first National Ambassador of Young People's Literature. He lives in Brooklyn.

Steven Weinberg writes and illustrates kids' books about dinosaurs, roller coasters, beards, and chainsaws. He lives in the Catskills in New York.
on September 11, 2019