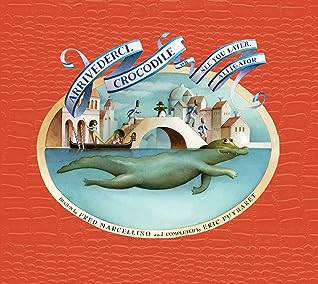 Can a hungry crocodile trick—and eat!—his way through Italian high society? Pack away your pasta—Crocodile is heading to Italy in this long-awaited sequel to Fred Marcellino’s award-winning I, Crocodile.

First that dastardly Napoleon kidnapped Crocodile from his beloved Egypt, then he dragged him to Paris to be gawked at, and THEN he tried to eat him! Luckily our dear croc escaped, but while Parisian life may be glamorous, life in Paris’s sewers is not. If only Napoleon had taken Crocodile to a more aquatic reptile–friendly city. Perhaps one with an excess of canals and better food…

Will our crocodile find his perfect home amongst Italian high-society? Or will he be revealed as an impasta? Pack away your pasta—Crocodile is heading to Italy in this long-awaited sequel to Fred Marcellino’s award-winning I, Crocodile.

This is a fun, whimsical tale with tons of historic and international surprises...and maybe a few bites on the way.

The Crocodile isn't so excited about Napoleon dragging him off to Paris, but at least, he escaped and is living in the sewer. Until he discovers that Napoleon is headed to Venice, that is. A long trip to Italy ends with many pleasant surprises, and the Crocodile might have discovered just the right place to be. If he can stay away from Napoleon.

I did not get a chance to read the first book but will be changing that. This book can be read as a stand alone, however.

This is a book for small adventure fans, who are ready for rivers of fun as waves of unexpected moments and excitement. It's told from the Crocodile's point of view. He's not only a curious reptile, but humorous too. While Venice in all of it's richness is already a treat to discover, it's even more interesting from the eyes of a crocodile. It's hard not to like him as he runs across true wonders, finds a place to fit in, and maybe escapes Napoleon's grip again.

Young readers are introduced to Venice not only through Crocodile's tale, but with colorful illustrations. The pride and energy of Venice comes to life as the fish markets, architecture, people and even a bit of the underwater world are presented. It's fun simply to gaze through the illustrations and see what Crocodile is up to next.

And here they are...
Fred Marcellino, the renowned and beloved artist and illustrator, won a Caldecott Honor for his first full-color picture book, Puss In Boots. He began his career in children's literature with Tor Seidler's A Rat's Tale in 1985, and followed with many other classics such as I, Crocodile and The Steadfast Tin Soldier.


Eric Puybaret has illustrated many children's books, including Suite for Human Nature, the bestselling Puff, the Magic Dragon, The Night Before Christmas, Over the Rainbow, as well as many others in his native country, France. Eric's critically claimed work was praised by then New Yrk Times as 'elegantly rendered' and Publishers Wek\ekly calls it  'graceful (and) whimsical'.