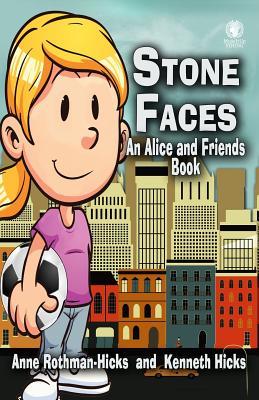 STONE FACES is the story of a ten-year-old girl named Alice who notices one day that her parents' faces have turned to stone. Soon afterward, they tell her they are going to get divorced and, in reaction, she allows her own face to turn to stone because she doesn't want anyone to know how much this hurts her. It is easier to deal with her friends when her stone face is in place, but she also begins to find herself alone more and more. While on her summer vacation at her aunt's house on Cape Cod, she sees a stone on the beach in the shape of a laughing man's face (called Mr. Happy Man). She soon discovers that this stone can talk and that it has friends among the other beach stones, who play games in the sand when people aren't around. Together with Mr. Happy Man and his friends, Alice develops an ingenious scheme to help her parents resolve their differences. Their plans are thrown awry when a woman finds Mr. Happy Man in the sand and walks off with him. Alice decides to rescue the stone and sneaks into the woman's house where she learns that the woman is actually a witch.

Alice's parents have want the worst thing in the world--a divorce. Alice isn't happy about this, and before she realizes it, she's wearing the same stone face that her parents are. When Alice is sent off to her Aunt's house near a beach, things get worse. She finds herself acting meaner than she knows she should. One day, she hears thunder approaching, but there isn't a storm. Stranger yet, no one else on the beach hears it. When Alice discovers where the noise is coming from, she can hardly believe it.

This story takes the very difficult topic of divorce and does a terrific job addressing it in a way kids ages 8 to 10 years can understand. Readers will not only easily sympathize with Alice but are transported into a magical adventure.

Alice is a normal girl who isn't sure how to take the news of her parents' intended divorce. Her anger, disbelief and sadness are realistic and delivered in a way kids can relate to. She acts out, hurting others with words and actions she later regrets. Even when Alice turns 'mean', the reasoning behind her actions is clear and it's easy to feel for her situation.

This is a fast paced story, which quickly shifts from a very real life problem into a world of fantasy. While trying to save her new found friends, Alice learns how to deal with her own emotions. The message is clear, but hangs as nicely as a shadow on the otherwise exciting plot.

At sixty pages, the story is a short and easy read. The plot is a little too simple for kids over the age of ten, but the vocabulary is too difficult for younger readers under the age of eight. It especially makes a nice read-aloud, the short chapters leaving many opportunities to stop and pick up the tale later again.

Summed up, this is a wonderful book for young middle graders who are faced with an approaching parents' divorce. It brings across a lovely message while remaining entertaining. And Alice is a girl readers will love to see again. 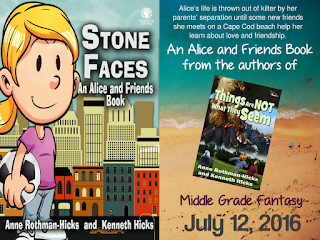 All about the authors!!!

Anne Rothman-Hicks and Kenneth Hicks have been married for a little over forty years and have produced about twenty books and exactly three children in that time. Anne is a graduate of Bryn Mawr College where, in 1969, as the fabled Sixties were drawing to a close, she met a student at Haverford College named Ken. They don’t like to admit that they met at a college mixer, but there it is!

Anne and Ken’s most recent novels and stories are set in New York City, where they have lived for most of their married lives.

Their most recent books, STONE FACES and BROWNSTONE FACES, feature Alice, a 10 year old girl with a vivid imagination that gets her into and out of trouble in New York City and on Cape Cod, MA.

In Ken and Anne’s tween book, THINGS ARE NOT WHAT THEY SEEM, Jennifer and James find a pigeon in Central Park whose foot was caught in a bit of string attached to a fence.  Only this pigeon was actually a man before he was turned into a pigeon over a hundred years earlier. Now he needs some help to be turned back into a man before a certain hawk captures and eats him instead. At least that is what it seems.

Ken and Anne have a website with the address www.randh71productions.com and a blog at www.randh71productions.com/blog. If you visit, you will find reviews of their books, links to those books, and photographs that may be the inspiration for future efforts. In case you were wondering about the web site address, “R” is for Rothman, “H” is for Hicks, and 71 is the year of their marriage. No secret codes or numerology anywhere.