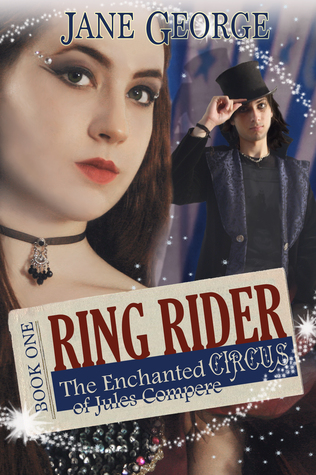 A teenage, trailer-park runaway is offered a place to live and work in a struggling, one-ring circus. But nothing at Circus Lunastrata is what it seems, especially not the young circus cook, a guitar-playing, Edgar-Allan-Poe-quoting guy intriguing enough to be dangerous to her off-limits heart.
Soon, she’s risking not only her heart, but her life, as she dares to enter this magical and treacherous new world.
But it’s the only world she’s ever wanted to call home.
Warning: The book you will read is the product of many magical transformations. You may have seen it in its previous stages, most notably as The Mumbo Jumbo Circus. But while lovers of this book's former mysterious mayhem may recognize characters and scenes, Ring Rider most definitely contains enough new twists to keep magic circus lovers turning the pages. But those more faint at heart, who may cover their eyes at the sight of swearing, violence, and mild sexual situations, may want to find a tamer circus elsewhere.

Like a magical dream, this story draws in with calliopes, mystical ju-ju and never ending adventure.

Evan is a trailer-park teen on the run from abusive foster parents. When she runs into a clown, who offers her the perfect escape, it seems to good to be true. Soon Evan finds herself in a circus, where magic overshadows reality and danger lurks in the shadows.

First off, this book does include swearing, violence, and hits upon difficult topics such as child abuse and 'cutting'. Still, the material is not handled tastelessly, haphazardly or without care, but rather concentrates on the difficulties of dealing with and healing from such situations.  I'd recommend it for readers ages 14+.

The first chapter dives  into Evans harsh life, making it impossible not to feel for her and immediately start rooting for her. Her past hangs like a dark fog much of the way through, but it's her determination which really makes her an inspiring character. The change from an abusive reality to the mystical magic of the circus allows uncertainty and doubt to keep the tension high. It's a lovely mix, which captures hope and dreams along with shadowy nightmares.

The characters in this are as colorful as the big top and have very distinct stories of their own. All are 'damaged' in their own way, making it difficult to discover with whom the real danger lies. There are layers of intrigue and treachery mixed in with the mystery of the magic, which is an intrigue all of its own. It's simply a delightful world to dive into.