I just got word from the author that release day is now June 8th...but can we ever celebrate an upcoming book too much?
Happy Monday, Kidlit lovers! I got my hands on an ARC, and it just happens to be its release day today. See that cover? Well, this one is as exciting as that cover suggests. I, for some reason, was expecting a bit more lost island feel with elements concerning diversity...but this isn't that at all. Nope, this one is fantasy pure with evil queens and hidden lands and determined princesses and true heroes and magic and...
Well, just take a look for yourself. 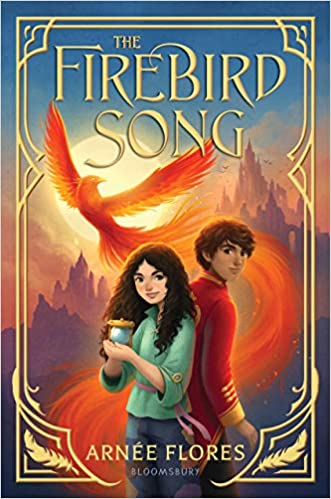 
The Kingdom of Lyrica was once warm and thriving, kept safe by the Firebird, whose feather and song was a blessing of peace and prosperity. But the Firebird disappeared, and Lyrica is now terrorized by the evil Spectress who wields her powers from within a volcano. All that remains is a mysterious message scrawled on the castle wall in the Queen's own hand: Wind. Woman. Thief.Young Prewitt has only known time without the Firebird, a life of constant cold, as his village is afraid to tempt the volcano monsters with even the feeblest fire. But he has heard whispers that the kingdom's princess survived the attack . . . and he is certain that if he can find her, together they can save Lyrica.Princess Calliope has no memories beyond living on her barge on the underground lake. But as she nears her twelfth birthday, she is certain there is more to life than the walls of a cave. When Prewitt finds her, he realizes that she is the missing princess: the only hope for Lyrica. Determined to decipher the meaning of her mother's strange message and find the Firebird, Calliope and Prewitt set off on a quest that puts them in more danger than either of them ever anticipated.

BOOK BLINK
* solid middle grade read
* lost princess with spunk
* learning to step beyond fear
* fantasy
* some high-tension moments
MY TIDBITS
The cover caught my eye on this one, and after reading the blurb, I couldn't wait to dive into the adventure. And it is a well-done, exciting read.
Prewitt is the Bargeboy and should inherit the position after an apprenticeship with his father, but nothing's been the same in the kingdom, since the evil Spectress took everything over and the Firebird disappeared. All girls his age were long hunted down and taken away, and those in the village, who have not been put to death by the Spectress's followers, live in constant fear. So, when his grandmother tells him that it's his destiny to find the supposedly long-dead princess and help her bring back the Firebird, he's not sure what to think. But when his grandmother is killed and his parents refuse to do anything about it, he's ready to fulfill her last wish and take it all on...even if it means he'll end up dead in the process.
Fantasy fans should really enjoy this one. There's magic, dark moments, action, demons, monsters, fight scenes, secrets, an evil queen, a princess, other worlds, and so much more. Adventure flows from every page, while a hero and a heroine go against all odds to achieve what the adults were unwilling face themselves. The barge boy and princess make an unexpected pair but yet, form the everlasting bond of friendship, which is needed to make it through. So, yes, there's tons of fantasy goodness in these pages.
More importantly, the story flows well. The characters have enough depth to draw in and both carry distinct personalities.. They are spunky, make mistakes, and despite moments of doubt, do what they need to do. The entire time they stay true to their age and come across naturally. The plot moves along quickly, never offering a dull moment, and there are details to bring the world to life. It was easy to venture the town's streets with Prewitt or go across the water on the barge and even discover the new lands. The only thing missing was a tad bit more backstory. At times, it did feel as if information from the past had been missed. Plus, the Spectress's evil side was mentioned and shown in the town through the bad circumstances, and yet, the extent of this didn't really come through all the time. The monsters did and many scenes kept me on the edge of my seat. But I really didn't know what to think of the Spectress for much of the read as she was only mentioned in their conversations until the later chapters.
Still, this is an engaging fantasy, which middle graders are sure to enjoy. And I can recommend it.
on May 03, 2021