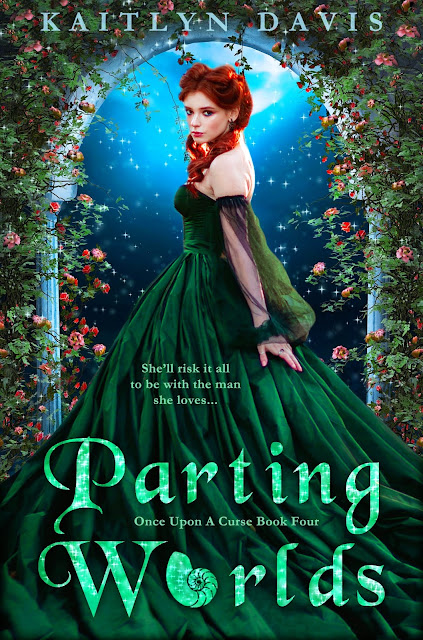 She'll risk it all to be with the man she loves… Don't miss PARTING WORLDS, a fantasy romance from bestselling author Kaitlyn Davis that reimagines the classic fairy tale of The Little Mermaid.

"I know humans like to start these sorts of stories with 'once upon a time,' but I'm worried that's setting the stage for false hopes. Because we don't all live, and we aren't all happy. Not every curse can be broken, after all."

Humans are dangerous. That's the lesson faeries are taught as soon as their flower petals unfurl, welcoming them into the world. It's the first thing Aerewyn remembers the priestesses telling her as a young girl. Humans are dangerous—don't show them your magic and never cross into their lands.

So why then, when she stumbles upon a human boy in the woods, does she find him so intriguing?

His blue eyes don't shine with malice. His smile doesn't menace. His laughter is as warm as the sun against her cheeks. And when she later discovers he's been knocked unconscious in a storm, injured and alone in the forest, the only thing he seems in danger of is dying.

*This is the fourth book in Once Upon a Curse, a series of interconnected stand-alone novels all set in the same fantasy universe.

Previous Books in the Series:

Gathering Frost (Once Upon a Curse #1) Purchase Link: https://books2read.com/GatheringFrost

Withering Frost (Once Upon a Curse #2) Purchase Link: https://books2read.com/witheringrose/

Chasing Midnight (Once Upon a Curse #3)  Purchase Link: https://books2read.com/chasingmidnight/

Always blessed with an overactive imagination, Kaitlyn has been writing ever since she picked up her first crayon and is overjoyed to share her work with the world. When she's not daydreaming, typing stories, or getting lost in fictional worlds, Kaitlyn can be found indulging in some puppy videos, watching a little too much television, or spending time with her family. If you have any questions for her--about her books, about scheduling an event, or just in general--you may contact her at:KaitlynDavisBooks@gmail.com

To stay up-to-date with all of Kaitlyn's new releases, sign up for her new release newsletter here: TinyLetter.com/KaitlynDavisBooks