Review: Cog and the Steel Tower by W.E. Larson 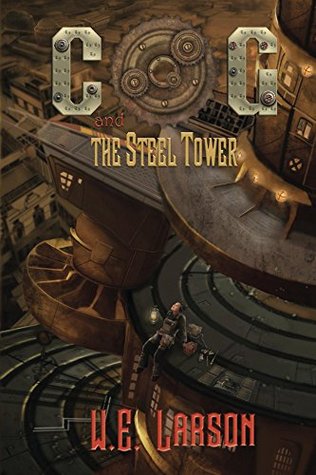 Thirteen-year-old Cog loved getting her hands greasy in her Uncle's workshop and building the occasional mud-cannon before the return of her mother knocked her life completely off its rails. Before long she's stowing away on a royal airship and tricking her way into a dream apprenticeship with the Queen's master engineer by pretending to be a boy. But her situation takes a dangerous turn when she discovers a plot to assassinate the Queen and throw the kingdom into war.

If she can keep her identity a secret despite her best friend developing a crush on her alter ego, unravel the deadly conspiracy, and keep the demanding master engineer happy, then maybe she can have the future she's always wanted. Keeping hidden identities and saving kingdoms may not be the same as fixing a steam wagon or an auto-mechanical potion mixer, but Cog has a set of precision screwdrivers and she isn't afraid to use them.

Follow Cog's rollicking adventure as she uses her wits and ingenuity to find friendship, trust, and justice in a colorful but sometimes unforgiving steampunk world full of mechanical mayhem.


With grease, gears and a girl named Cog, this steampunk adventure shoots off with full speed action and refuses to slow down until the very last page.

Thirteen-year-old Cog is as delightful as her name. She's not a frilly type of girl, not that she has anything against lacy dresses, but nothing fits better to the world of mechanics than a sturdy pair of britches and short hair. And this girl has talent too. When her real mother appears and wants to 'improve' Cog's life, the true adventure begins.

This is simply a fun story. The first scene already captures the imagination as Cog and her best friend prepare to launch a muddy slime ball with Cog's latest invention and insure that a snotty girl in their class won't be bothering them anymore. It's impossible not to smile as that slime goes splat. But no matter how evil this might sounds, Cog is anything but mean. She's got heart, spunk and keeps her chin up no matter how rotten things get. This constant spark with a bit of rascal thrown in, wins sympathy and the wish that she could be your best friend.

In this story, Cog not only has to master her own problems but finds herself in layers of mystery and intrigue. The truth is well hidden, making it impossible to guess what the true outcome will be. There are so many interesting characters, each with their own histories and quirks, which make it impossible to guess who the real 'bad guys' are. But then, Cog has enough problems of her own as she struggles to keep even more secrets. It's a fun, multi-layered excitement the entire way through with lots of fun gadgets and machines thrown in.

Of course, there are several lessons thrown in as well. Cog learns the difficulty of making friends and how important trust can be. Other topics such as self-confidence, getting to know others before judging them and battling prejudices are also addressed. Readers will have no trouble placing themselves in the same situations and relating to Cog as she battles to make her way through.

Summed up, this is a great adventure for friends of gears and fantasy, especially ages 9 to 12 (although older readers are sure to enjoy it too). I hope that this isn't the last we'll see of Cog since she's definitely the type of girl who won't be happy if things get dull and even greater adventures are sure to be on their way. 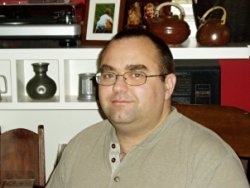 W.E. Larson was born in Manhattan -- the Kansas one -- and raised mostly in Topeka Kansas. He went to college in San Antonio at Trinity University where he earned a degree in Physics. After the cancellation of the Superconducting Super Collider, he decided to seek his fortune with software engineering instead. He has worked as a software engineer at a variety of companies, carefully avoiding ones that have a big IPO that makes all the employees rich.
An interest in programming started back in middle school where he wasted time in computer lab writing video games on one of the school's Apple IIe, learning a lot more than the class was teaching. He still has the Atari 400 he parents got him back then. With that kind of nerd potential he naturally gravitated to reading lots of science fiction and fantasy.
Eventually, he gained an interest in writing his own fantastical tales and has written three fantasy novels. Cog and the Steel Tower is the first one ready for public consumption.
Currently, he lives in the United States in the Kansas City metro with his wife, two kids, and three dogs. He normally goes by the name Erik Larson, but decided on W.E. Larson for a pen name since there is already a well-known author with his name. Right now he's working on the sequel to Cog and the Steel Tower.