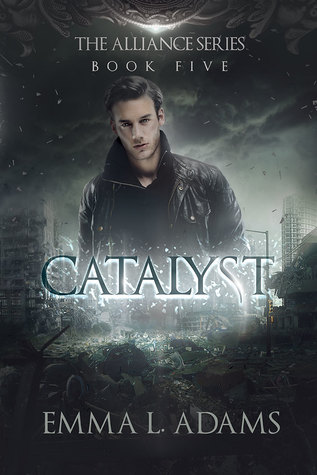 Kay and Ada achieved the impossible and defeated the StoneKing, but only they know about the terrible dangers beyond the Alliance’s borders — and within them.All Kay wanted was to escape the shadow of his father, Lawrence Walker, the former council member responsible for dooming Ada’s homeworld to destruction. Now Walker is back, his plans more ruthless than ever, and the world he left behind might be the final catalyst for a cross-world war.Kay and Ada race against the clock to stop Walker and save a world from the deadly trap that cost Kay’s mother her life. With the Alliance turning on itself and Ada’s homeworld threatening war, Kay and Ada must overcome their most dangerous adversary yet before it tears the Multiverse apart.


First off, this isn't not sold as a YA but rather marked for adults. However, there's nothing in this series except for several violent fight scenes, which aren't even rare in books intended for the YA audience, which make it inappropriate for a younger audience.

Packed with intrigue, dangerous monsters and unknown agendas, this book takes fantasy friends on a non-stop action ride, which leaves them sitting on the edge of their seats until the very end.

Kay and Ada have finally put a stop to the StoneKing and are more than ready for life to smooth back into something more normal. Too bad, though because the Multiverse has other plans. Kay's father returns after missing for years and immediately returns to his powerful position in the Alliance, but Kay knows his father is harboring some sort of scheme. When war threatens and no action is being taken, Kay and Ada take things into their own hands in hopes of saving the world.

After the high tension of the battle with the StoneKing, this book slightly shifts gears away from constant danger and pure hand-to-hand combat, drifitng a bit more into deeper unseen evils. The tiny switch comes with perfect timing and finesse into this series, allowing Kay's character development to step a little more forward without losing any of the tension or excitement, which rides through the rest of the series. Kay's past comes to the surface as well as the shadows which continue to haunt him. This extra depth makes him a character not easily forgotten and a hero even more worthy to love.

As history's secrets collide with the mounting immediate problems, the layers of plot multiply and thicken. There's a lot going on in these pages, and it's easy to miss a beat. Especially toward the end, when Ava takes on one front so Kay can deal with another, things gets a bit muddled. Her climatic scenes get a bit lost in the shuffle. But since Kay is the main focus in this novel, it's easy to forgive as he battles against impossible odds on his own front. Kay's journey is simply a treat to follow and cheer for the entire way through.

The ending takes care of all loose ends. . .well, the immediate ones. A perfect touch of cliff-hanger suspense is thrown in to make the reader yearn for the final installment in this series. If it's anything like the other books, it's sure to be a good one.