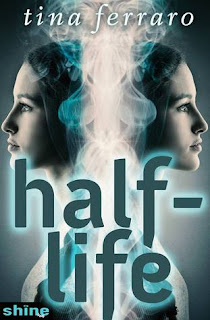 
Half a life is not worth living.Probably not a good idea to take advice from your dead twin sister. High school sophomore Trisha Traynor and friends have played the Halloween mirror game for years, the one that’s supposed to show a glimpse of the guy they’ll marry. But no one’s ever seen anything.Until tonight—when Trisha is gob smacked by the candlelit arrival of her long-deceased twin sister, instead of her crush, Kirk Maxwell.In a voice and vision that only Trisha can hear and see, Chessie claims to be back on a compassionate journey. Trisha fears she’s gone nuthouse crazy. But she nonetheless follows the instructions Chessie outlines in their nightly conversations, until she finds herself stepping across some ethical lines, and probably ending all chances with Kirk.When a sisterly showdown ensues, resulting in the shattering of the mirror, Chessie’s gone again, and a heartsick Trisha sets about righting her recent wrongs. That is, until she stumbles upon the real reason Chessie had come back and the most important glimpse yet that the mirror could never predict.

Trisha is a teenage girl packed with spunk, lots of corners and still, a big heart. She wants what all girls her age want, to be accepted, but already with the opening scene, it becomes clear that her long-time best friend has her head somewhere else.

This is a cute, short, coming of age story. Trisha is trying to please her parents, who are still upset after her twin sister's death years before, while fighting to get her social life worked around. Of course, boys are a big part of this. There's a great relationship between her and her parents, not so far in that it's always rosy, but rather realistic. The mother has troubles dealing with the sister's death and does let it affect how she raises Trisha, and somehow, Trisha has to come to terms with this.

Peer-pressure is also a big issue in this story, a problem Trisha has troubles dealing with, especially when pleasing certain people helps her reach goals she and her mother both have set for her. There's a lot of strands to this weave, and that's exactly what makes it so easy to sympathize with. Life isn't clear cut either.

The paranormal aspect is cute and pulls at the heart strings. Still, I had felt this could have been built out more. We get to know Chessie a little, but it wasn't enough for me to connect with her. But in a story this short, that's also a tall task to expect. Plus, the ending felt rushed in so far that it wrapped up a little too nicely.

But, in general, this is a smooth read which hits on many topics teens will connect with, and I believe they'll enjoy reading this and have no trouble feeling for Trisha. They'll see a lot of themselves in many parts of this story.