Mommy and Daddy's Day with Running With the Wolves by J.E. Reed

Every so often, I have a Mommy and Daddy's Day here on Bookworm for Kids. After all, parents like to read too. These books do not have content any more or less appropriate than a young adult novel...in other words, nothing you need to hide under your bed. Today's book is a fantasy/gamer novel and it's packed with action. There are absolutely no 'elicit' scenes. There is violence, but nothing over the top or overly gory...just fitting to battles with monsters, magic, swords and such. 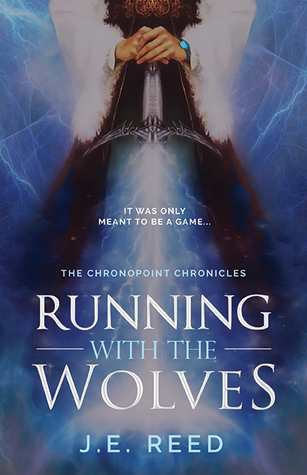 Ten realms will test everything.For two years she led an alliance, forming bonds with people from around the world—but someone was watching. Chronopoint was only meant to be a game, until she found herself trapped in that world.Fighting to survive, Kiuno discovers she’s not the only player who has been thrown into this strange land. Hideous, twisted monsters only seen in nightmares plague their every move. Untold powers lie at the hands of the chosen and flames dance at her fingertips.Can Kiuno find the players from her alliance or will she be too late and discover death has taken far more than she ever imagined?


Survival, magic and the unbreakable desire to save a spouse, make this into an action packed read full of heart.

Kiuno wakes up to find herself in the real life version of her favorite game. While the rumors and theories about how everyone was transported to this game are terrifying all on their own, this problem is shoved to the back of the line thanks to the basic need to first survive and win the game...if that's even possible. With a few new found friends, she starts the search for her husband, hoping he's survived not only the game's threats, but the unknown ones as well. When the run-in with a traveling group not only brings more information, but also reveals her ability to wield magic, things take a difficult turn. Kiuno not only has to head for the 'front line' of fighters, who are trying to win the game to save everyone caught inside, but she wears the stone, which identifies her as the mysterious magic wielder, who has the ability to save them all or destroy everything.

I'd read a novella, which belongs to this series, first but was left confused. After diving into the real first book, however, I'm now a fan. Kiuno is a thirty-something woman, who loves her husband and seems to be a pretty normal person, who simply enjoys gaming. She has a good head on her shoulders, knows basic survival skills thanks to a few camping trips, and is capable of learning. She's kind, listens, loyal and will give anything to protect those she cares for. And it's the later of these, which draws so many people to her side. She's a power-girl, who doesn't start out that way and is thrust into the position thanks to fate...and embraces it as well as she can. Which isn't always perfect, and that's what makes her a great heroine.

Kiuno has a knack for drawing others, especially men, to her side, and while she allows strong friendships to form, it never crosses the line into anything else. Her loyalty to her husband was inspiring and simply nice to see. And it doesn't hurt the story in any way.

Action is ever present because this is a dangerous world. It builds slowly as the levels in a game would, starting with a gentle realm and growing more deadly every step up. Creatures aren't the only threat as the author displays the ugly side of human nature and the desire to survive as well. Still, friendship is key and gives tons of hope. We get character depth, inspiration, a story that keeps the reader at the edge of their seat, and heroes/heroines who are easy to connect with and root for.

I'm giving this one two-thumbs up and looking forward to diving into the next book in the series.
on July 11, 2020

Email ThisBlogThis!Share to TwitterShare to FacebookShare to Pinterest
Labels: J.E. Reed, Running With the Wolves, The Chronopoint Chronicles