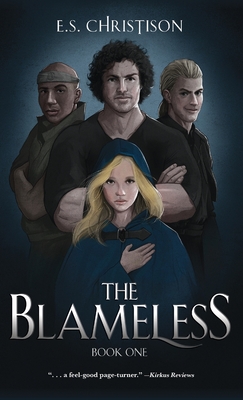 
Briana, Princess of Predonia, has lived a happy and sheltered life. Then, in a single night, her father's kingdom is overthrown, her family is murdered, and centuries of peace are violently shattered. Fleeing for her life, Brie is rescued by Flinton, Derek, and Kove, three powerful protectors who take her under their wing and bring her to their secret stronghold deep in the mountains. There, Brie learns about the Blameless, people who receive magical gifts from the gods after performing acts of supreme selflessness. Among the Blameless, Brie discovers an amazing new world, gaining witty and resourceful companions as she strives to master the mysterious power within her. She determines to seek justice for her family, and, one day, to take back her people's freedom.

Thrilling and packed with action from beginning to end, this book still maintained a wholesome tale with tons of feel-good moments while keeping the reader on the edge of the seat the entire time.

Brie is almost fourteen and a princess, but when her kingdom is attacked, and her family murdered in front of her, her life flips upside down. Managing to escape, she is discovered by men, who worked for her father. They promise to protect her and escort her back to their own town, where they will then decide what to do next. But these men are not as simple as Brie suspects; they are Blameless, which means that they hold magical powers. And that is only the beginning of the secrets which have been kept for her.

This book was so much better than I thought it might be. The first pages start with a very gripping scene as Brie flees from the castle, while her kingdom is being attack around her. Her panic and fears are understandable as well as her decision to trust three men, which she really knows nothing about. She has a lot to learn, but is determined to do her best. It's her spirit, which makes her easy to root for, as she's thrust from one difficult situation into the next. The entire time, she has to come to terms with the horror of her family's death, her own unexpected past, and the dangers she must face in order to get her kingdom back...and she is determined to do that.

There is definitely a ton of action in this book, but there's also quite a bit of heart. Brie meets friends and even has the chance to sink into a make-shift family and have some commotion with a few teens her age. But then, there are quite a few characters in the book, which give the tale a lovely richness and promise so much to come during the series. I appreciated the author's ability to keep Brie fairly true to her age, while still giving her just the right amount of maturity to make her a future ruler to root for. It's a difficult balance and the author makes it work.

Another bonus in these pages is that romance isn't there as far as Brie is concerned. As a young teen, she already has more than enough on her plate. This might change during the series (who knows?), but for now, she has enough to deal with...including a attacker to hate.

The friendships formed are inspiring, and the loyalty, trust and love on this front already touches the heart. It makes for a wonderful read to get lost in, and I can't wait to see what happens in the rest of the series.

Elisabeth S. Christison’s very first job was as a scribe in a library. She was raised by her father, and he passed a love of reading to her, especially fantasy. Elisabeth has passed this same love on to her seven children, and as a result, much of her adult life has been spent in the realms of their make-believe kingdoms, giving her firsthand experience with the whimsical workings of their young minds. She shared her own stories with them at bedtime, but never chose to write them down until an idea she couldn’t ignore blazed into her mind. Elisabeth lives with her family in Ohio, and when she isn’t busy navigating the seas of motherhood, working as a nurse, or castle-hopping and enjoying wine and chocolate with her husband, she can be found writing the sequel to the Blameless or dreaming up other tales.

Email ThisBlogThis!Share to TwitterShare to FacebookShare to Pinterest
Labels: E.S. Christison, The Blameless