Review: Arabella and the Magic Pencil by Stephanie M. Ward 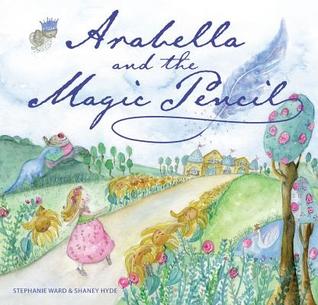 
Arabella is a beloved only child who has everything a little girl could want. That is, until her brother, Avery, the master of mayhem, comes along. While she certainly loves him, she finds that it’s sometimes very hard to like him. So she spends her days creating marvelous, magnificent things with her magic pencil, and trying to ignore him. But when he spoils her perfectly proper tea party, she decides drastic action is required and she erases him from her life. Oops! But things aren’t the same without him — can she get him back?
Arabella and the Magic Pencil is a charming story, which will appeal to any child coming to terms with a new sibling and to caregivers who are supporting changing family dynamics, as well as those who love fantasy and engaging, alliterative language.

With a fairy tale touch, this adorable tale weaves dreams and magic around sibling dynamics.

Arabella is to be the future duchess, and as such receives whatever she wishes for her birthday. Over the years, her wishes of been big and small. But this time, she has something special planned. The moment she has the magical pencil in hand, a wonderful world opens up to her. Everything she draws becomes whimsical reality. When she creates an especially wonderful scene, the master of mayhem, her little brother (and something she didn't wish for), ruins it. Unable to take anymore of his antics, she does something she probably shouldn't do.

Arabella is a sweet, future duchess which is sure to make princess fans smile. Her wishes are always positive as are the things she does with her pencil. It's a fantastical world, which sparkles and shines. The words and text flow perfectly with this imaginative world, letting the fairy tale atmosphere come across in every way. The little brother adds a humorous twist, which later becomes much more. The message at the end is clear, and will be understood by the intended audience.

The illustrations are done with love and care, reflecting the story itself. The colors swirl with glee and imagination as the world around Arabella comes to life with as much fun as she is herself. When her brother disappears, the colors fade, displaying the atmosphere in a wonderful way. It's fun simply to glimpse through the book and peer at the illustrations, which I'm sure kids will do time and again.


Book Buzz...
"A magical story with luscious language, whimsical illustrations and strong emotional core that will surprise and delight young readers."
- Debra Tidball, award-winning author of The Scared Book and When I See Grandma

The Illustrator...
Shaney Hyde is an Early Childhood Teacher from Melbourne who runs art workshops for children and draws inspiration from her own playful childhood.