Review: Reaching for the Moon by Katherine Johnson

It's July! And it also happens to mark the 50th anniversary of the Apollo 11 space flight. To help celebrate this monumental motion, I was lucky enough to receive the autobiography of Katherine Johnson, a woman who helped make the flight possible. 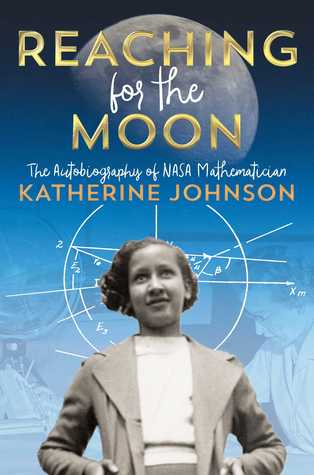 As a young girl, Katherine Johnson showed an exceptional aptitude for math. In school she quickly skipped ahead several grades and was soon studying complex equations with the support of a professor who saw great promise in her. But ability and opportunity did not always go hand in hand. As an African American and a girl growing up in an era of brutal racism and sexism, Katherine faced daily challenges. Still, she lived her life with her father’s words in mind: “You are no better than anyone else, and nobody else is better than you.”

In the early 1950s, Katherine was thrilled to join the organization that would become NASA. She worked on many of NASA’s biggest projects including the Apollo 11 mission that landed the first men on the moon.

Katherine Johnson’s story was made famous in the bestselling book and Oscar-nominated film Hidden Figures. Now in Reaching for the Moon she tells her own story for the first time, in a lively autobiography that will inspire young readers everywhere.

Starting from when Katherine Johnson was a young girl, these pages recount her childhood in a world of segregation and sexism and show her path to being apart of an historical moment—a recount which is sure to inspire and allow young readers to dream of their own futures.

Growing up on a farm, and then in the small town of White Sulfur Springs, Katherine Johnson was blessed with a loving family and wise parents. In a world where segregation made many things for her and her family a battle, her father encouraged her and, with determination, helped to guide her onto a path, which would not only lead her in a special direction, but bring her to help break boundaries which were closed to women before.

Katherine Johnson takes great care in bringing over the details of her life, which not only help middle grade readers learn more about a difficult time in American history, but enable them to connect with her younger (and later, older) self. The trip through daily life brings allows her to come across as a very normal girl, while still making clear the difficulties she and her family faced. The information is logical, easy to understand, and never boring or dry. Historical facts and events are dribbled in effortlessly as Katherine grows through the various stages of life, facing different trials and stumbling blocks along the way.

The writing flows smoothly and holds a constant pace, keeping every chapter interesting. The addition of photos from her life help bring the reality of it home and add the extra touch. Not only middle graders will find Katherine's journey fascinating, but even older readers will enjoy this read. 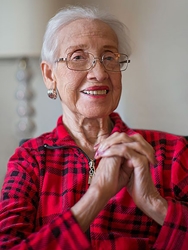 Katherine Johnson is a former NASA mathematician whose work was critical to the success of many of their initiatives, including the Apollo Lunar landing program and the start of the Space Shuttle program. Throughout her long career she has received numerous awards, including the nation’s highest civilian award, the Presidential Medal of Freedom, from President Barack Obama.

Additionally, one day before her 100th birthday, West Virginia State University unveiled a new statue of her along with a scholarship in her name. In May 2018, Mattel released a Barbie doll in Katherine’s likeness as part of their “Inspiring Women” line.

Email ThisBlogThis!Share to TwitterShare to FacebookShare to Pinterest
Labels: Apollo 11, Katherine Johnson, Reaching for the Moon, The Autobiography of NASA Mathematician Katherine Johnson