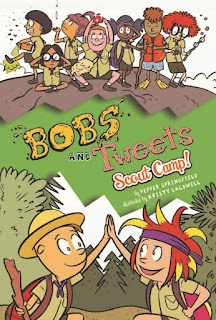 But when Scout Leader Mike splits the group in two for a “team-building” exercise that forces them into survival mode, the Bobs and Tweets must work together in order to overcome some serious challenges. Will the scouts be able to pitch a tent, build a fire, and boil water before the ominous storm clouds keep them from finding their way home?

Scout Camp!  flawlessly demonstrates just how far a little teamwork and problem-solving can go when learning new skills and having fun along the way!

KEEP YOUR EYES OPEN
FOR IT TO APPEAR ON
AUGUST 1ST!!!

Excitement, fun, and a little chaos abound in this silly yet meaningful tale.

Bob and Tweet are just as excited as their friends as they head off to Scout Camp. All sorts of adventures...and questions for the kids...await as they bound off into this new adventure. Just when Bob and Tweet are settling in, a surprise pulls them apart and has them competing against each other. But Bob and Tweet are best friends through and through, even when things get rocky for a time.

This is the fourth book in the Bobs and Tweets series. Although it helps to understand the two by starting with the first book, it's by no means necessary to understand what's going on. In other words, this can be read as a stand alone.

While the other books concentrate more on Bobs and Tweets, this one allows their classmates to shine as well. The excitement of heading off to camp radiates from the page as various characters constantly throw out statements, changing the topic as fast and furious as camp really hits for the first time. It's a bit chaotic, and that's perfect.

The illustrations are as fun as the text and add just the right touch to make this a grab for even more reluctant readers. The story is kept concise and short, allowing the quirky fun to remain front and center. Even when the valuable message hits (and there is one that kids can relate too), it's instantly caught along in the fast-paced current. In other words, it's clear but never blatantly so. It's the kind of story to simply enjoy in all of it's ridiculousness, friendship and camp fun.

And here are the other books by Pepper Springfield...