The blog tour runs from 25 June till 15 July. See the tour schedule here. 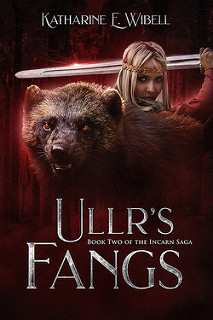 
According to legend, when the world was young, two gods of war — one male, one female — were destined for each other. Yet Ullr, forever unfaithful, lost the love of Issaura, his true match, and was forsworn. His violent anger and bitter rage grew and intensified, poisoning all creation and humanity.

Now that the Raiders’ long ships have faded from sight, the kingdom of Elysia is beginning to recover from the summer’s war with the brutal invaders from across the sea. Yet darker forces have taken root, forces that can alter the future of the land and its people in unthinkable ways. Seventeen-year-old Lluava must discover the means to prevent her world from collapsing. But in doing so, will she succumb to that darkness?

You can find Ullr’s Fangs on Goodreads

You can buy Ullr’s Fangs here on Amazon


Growling, Lluava crouched low and prepared to attack. Her inner
heat seared up, then, with her quick realization, was smothered
unforgivingly. Lluava could not shift without risk of destroying her
braces. Hand-to-hand combat was her only choice.
The Raider held one of their thinner swords from across the sea. The
pinprick blade appeared fragile against the man’s girth, yet Lluava
knew how lethal it was.
Snarling, Lluava lashed out. Claws missed their target. Before she
could strike again, she was deterred by the sword’s hot temper. As
Lluava countered, she spied a second attacker approaching. This
one carried a thick mace. Bits of flesh and hair were entangled in
its spikes.
Switching to defensive maneuvers, Lluava stood ready to receive
a blow from either direction. When the first man grunted, they both
went into action simultaneously. There was no way she would be
able to protect herself.
At least I will take one out, Lluava thought stoically. Choosing the
sword-bearer, she ducked under his swinging blade and tore into
his torso, her Claws freeing the man’s imprisoned intestines.
Spinning round, she saw two arrow-like projections protruding from
the second Raider’s throat. The red of his grisly beard mixed with
the blood he spat out. Leaving her would-be offender in his death
rattle, Lluava turned to nod thanks to Yamir. His throwing quills had
done their job.
As the fight wore on, Lluava realized that although the braces were
indeed preventing her injury from flaring up, the need to shift was
much more important. Moving to the edge of the main clearing, Lluava
took advantage of an atypical rock formation. Squatting low, she
unstrapped the bindings around her arms. Lacking the time to figure
out how to detach the braces from Issaura’s Claws, Lluava hid both
the weapons and the braces deep in a crevice in the rocks.
In the blink of an eye she had shifted, bolting from her hiding place.
Like a striped fiend from hell, Lluava tore through opponent after
opponent. The stink of blood and death intermingled with a smoky
odor that she could not identify.
A war horn blew twice.
She sensed a shift in the enemy’s mood. The men began backing
away from her, the ring of Raiders reminding her of the judgmental
high councilmen she had so happily left behind. The circle of men
separated her from Yamir. Then the crowd split.
A man like none other strode forth. A head taller than the rest, his
helmet sported an uncut set of adult steer horns. Stopping in front
of her, he let the head of his maul slam into the ground. The face
of the weapon was as big as her own. The strong smoky odor
wafting about made her eyes water. As she blinked back tears,
the man’s bloodshot gaze caught hold of hers. Then the hulk cried
out—a sound far from human.
The man-thing before her charged, swinging his weapon wildly.
Lluava turned tail and ran, clawing her way through the onlookers.
Breaking through the circle, she charged across the battlefield.
There was no way she could defend herself against a creature like
that. Behind her, the massive shape swept past the warriors, laying
low everyone in his path, Elysians and Raiders alike.
In her mind’s eye, Lluava carried the image of the Raider’s bloodied
mouth, the slivers of flesh stuck in his teeth.
Skirting a trio of marauders, Lluava listened to their cries as they
were tossed out of the way by the behemoth. The heavy tread of
his feet did not diminish. He would not be shaken off her trail.
Lluava was nearing the Elysian side of the field. The soldiers moved
forward to give her aid. Nothing could prepare them for the
unstoppable force that would send them to the afterworld.
I can’t lead him to our camp, though Lluava in a panic. Veering to
the left, she began to lead her pursuer away from her comrades. A
sharp catch in her side caused her to stumble. She tried to run through
it, but to no avail. She could not continue this pace much longer.
A thick spear hurtled over her shoulder. Lluava recognized it as Yamir’s.
With a thunk, the weapon sank into its mark. Lluava looked over
her shoulder and saw the giant Raider still moving toward her,
despite the shaft of the spear that skewered his left shoulder. Oblivious
to his injury, the man raised his maul above his head.
A second serrated spear severed the man’s wrist.
“Watch out!” Yamir cried. Lluava quickly skidded to a halt to prevent
herself from colliding with a small marauder. Slicing through the man
with tooth and claw, Lluava glanced back once again. As impossible
as it seemed, the massive Raider had vanished.
Yamir ran up to her. “What was that?”
“I don’t know.” Looking at the pools of blood soaking into the earth,
Lluava said, “He won’t last much longer.”
Yamir cautiously circled the massive maul, to which the hand was still
attached. Its shaft was as long as he was tall. Turning to the carnage in
their wake, Lluava was stunned. “If there are more like him, we are in
trouble.”

First book in the series: 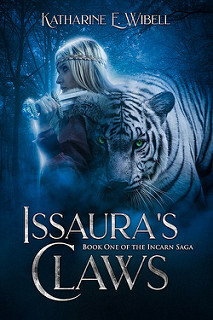 “If they fail to trust each other, the consequences will be devastating. Death and destruction are on the horizon and time is running out.” 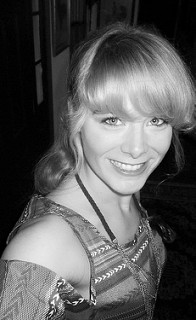 Katharine Wibell’s lifelong interest in mythology includes epic poetry like the Odyssey, Ramayana, Beowulf, and the Nibelungenlied. In addition, she is interested in all things animal whether training dogs, apprenticing at a children’s zoo, or caring for injured animals as a licensed wildlife rehabilitator. After receiving degrees from Mercer University in both art and psychology with an emphasis in animal behavior, Wibell moved to New Orleans with her dog, Alli, to kick start her career as an artist and a writer. Her first literary works blend her knowledge of the animal world with the world of high fantasy.

The blog tour runs from 25 June till 15 July. See the tour schedule here.

GIVEAWAY!!!
There is a tour wide giveaway for the blog tour of Ullr’s Fangs. One winner will win a $25 Amazon gift card!