Review: Twain's Treasure: The Phantom Files by William B. Wolfe 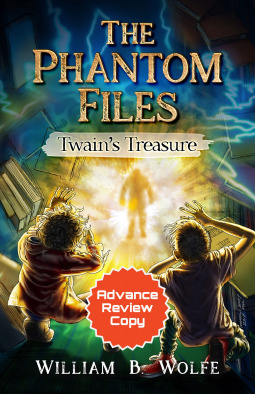 Dead men tell no tales. Except to me. When I’m around, they can’t shut up.

My name is Alex April, and I see ghosts. Worse, they see me. If my paranormal-obsessed best friend Bones knew, he’d be crazy happy. But only one thing happens when I acknowledge their presence. Trouble.

I’ve gotten so good at hiding my ability, everyone believes it. Even the ghosts…most of the time.

Except now I’ve got the nightmare of all homework assignments: write a book report about Mark Twain. Trouble is, I have to go to the library to check out a book. Not just any library—the Hannibal, Missouri’s Free Library, the most haunted building in town. And it’s haunted by none other than Samuel Langhorne Clemens himself.

Following me everywhere I go, desperate to find the legendary Twain Treasure. What exactly is that treasure? Not even Sam can say.

Well, Bones has always wanted to go on a real-life ghost adventure. I just hope this one doesn’t land us both in ZIP code 63409-DEAD.

Ghosts, humor and adventure make this a fun read while giving a wonderful glimpse into the life of one of America's most famous authors, Mark Twain.

Alex can see and hear ghosts, and they know he can. Too bad his parents and everyone else have always believed he suffers from schizophrenia. Now, in the town of Hannibal, he's off to a fresh start, and now, he's old enough to know how to avoid ghosts as much as he can. Unfortunately, his best friend is a paranormal fan...an extreme fan. Just when Alex thinks he can balance it all, his teacher assigns the class to finish a report involving Mark Twain by the end of school break. And he insists they use the town's library—one of the most haunted buildings in Hannibal. And it's hear that Alex runs into the most persistent, determined ghost ever.

This is a wonderful mixture of adventure and history. The story is fast-paced and full of unexpected twists and turns as Alex goes from a ghostly cheerleader in a graveyard to a much too alive and violent football player to a ghost who doesn't follow any of the 'ghostly rules'. And amid all of this, he has to solve a mystery too. It's a fun mixture and teaches things along the way without ever having that 'learning' feel.

Alex is a great kid, who has a fairly troubled past thanks to his ridiculous 'talent' to see and hear ghosts. How difficult his past has been is shown in flash-backs, which are strewn throughout the book. By putting these in italics, the author makes the transitions very clear and smooth. And they come just a little bit at a time, exactly the amount needed to gradually gain a deeper understanding of Alex and respect how much he's tackled in his life so far. He's easy to sympathize with, definitely not a pansy, and deals with things as best he can.

His best friend, Bones, adds a nice and, at times, humorous note. Although Bones never develops as a character as much as Alex does, he gives the entire story a lovely twist and keeps Alex grounded without even realizing it.

This is a fun start to what appears to be an exciting series, one which even teachers and homeschoolers are sure to appreciate.

If it's unbelievable, William Wolfe probably believes in it—and writes about it. From ghosts to extraterrestrials, psychic cats, fairy folk, and black-eyed kids, nothing is too weird to guest star in his stories and books. “Too weird,” he believes, is just about the right amount of weird. He grew up near the weirdly named community of Monkey’s Eyebrow, Kentucky, reading every science fiction and fantasy book he could lay hands on and eventually becoming a journalist, where he learned that the truth is often more unbelievable than fiction. He lives in Louisville, Kentucky, with his weird family and their weirder cat, Mr. Bite