Review: The Seclusion by Jacqui Castle 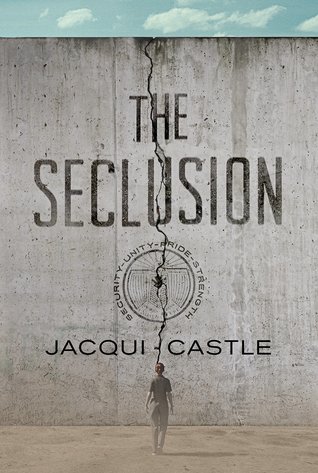 THE SECLUSION
by Jacqui Castle
Inkshares
YA Dystopian
300 pages


In the year 2090, America has walled itself off from the rest of the world. When her father is arrested by the totalitarian Board, a young woman sets out to escape the only country she’s ever known.

While on a routine assignment scouting the viability of dwindling natural resources outside the massive urban centers most American citizens call home, Patricia ’Patch’ and her co-worker Rexx discover a relic from the past containing dangerous contraband―unedited books from before The Seclusion. These texts will spark an unquenchable thirst for the truth that sees Patch’s father arrested by the totalitarian Board.

Evading her own arrest, Patch and Rexx set out across a ruined future United States, seeking some way to escape the only home they’ve ever known. Along the way, they learn about how their country came to be this way and fall in love. But their newfound knowledge may lead to their own demise.

“Jacqui Castle’s new novel sets the hook in a wickedly-quick heartbeat. Not only does her eerily prescient story keep that hook in place throughout, it often leads to moments where you feel a chill that’s driven not only by her words, but also by the words we hear in the news and social media every day.” —Mike Rich, author of Skavenger's Hunt and screenwriter of The Rookie, Radio, and Finding Forrester

“If you love The Giver, you will love The Seclusion. Castle paints a well-developed world in a realistic possible future with a pair of unlikely heroes you want to cheer for. There are no easy victories in this dark, gritty dystopian that checks all the right boxes.” —David Estes, bestselling author of The Dwellers Saga and The Fatemarked Epic.

This is a book for fans of books like Divergent or The Giver as it goes deep into the life of one young woman as she slowly awakens to a greater world around her.

Patricia is satisfied with life. She's got a better job than most with more freedoms than many and has a caring family. The Board, the ruling group, won't tolerate anything beyond their rules, but she's okay with that. Until her and her best friend, Rexx, make a discovery which turns everything they've been taught on its head. Suddenly, Patricia finds herself a fugitive, something she never wanted to be.

The is an engaging, dystopian read which takes many of the lovely aspects found in this genre and builds them around a character with great depth. The author lets the reader get to know Patricia in and out, not at the point right before everything starts falling apart as in most dystopians, but earlier on. Much of the first half of the book is spent getting to know the daily life, dreams, and fears of Patricia as she lives fairly satisfied and convinced of the country and its policies. The doctrines and brief moments of information give light to the society and regulations, but the real dirt comes later on. This makes for a bit of a slower read in the first chapters, but also gives the reader a deepened connection to Patricia and understanding of her plight.

As the story progresses, the tension grows. It's hard not to become invested in Patricia and her struggles, making this is read hard to put down, especially toward the last chapters. Emotions are evoked while the plot builds, and the entire thing leaves off with a cliff hanger, begging to head off into book two to see what happens next.

Food for thought peppers the pages as the problems fall in bit by bit. A couple background pieces are fuzzy, but most sits pretty firm and allows the reader to sink into the story.

Fans of YA dystopian are sure to enjoy this one, especially if they like having a little time to dig deeper into the main character and society first. I'm looking forward to seeing where the next book will take Patricia and her friends.

Email ThisBlogThis!Share to TwitterShare to FacebookShare to Pinterest
Labels: Jacqui Castle, The Seclusion, YA Dystopian