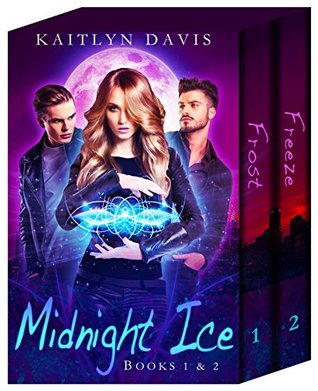 
Book One - FROST:Life's tough for a vampire thief on the run--just ask Pandora Scott, she knows. Four years ago she ran away from home after everyone she loved betrayed her. But now her annoyingly grown up (and handsome) ex boyfriend is stalking her, begging her to return. A mysterious vamp with a particularly dangerous (and sexy) stare keeps popping unexpectedly into her life. The extremely powerful head vampire of New York is hunting her down because she may (or may not) have broken into his highly-secure, highly-secretive personal vault. And the fate she's been trying to outrun? Well, it's about to catch up. Because even a super-speedy vamp with the ability to disappear can't escape her own destiny.Book Two - FREEZE:Pandora Scott is in jail...again. Everyone she once loved betrayed her...again. And some of the most powerful people in the world want her dead...yes, again. Sound familiar? But if there's one thing Pandora is good at, it's wriggling her way out of life or death situations, and this time is no different. Armed with her ability to disappear and aided by the mysterious Sam, Pandora's got a plan. Escape the most secure prison in the world. Evade the most powerful trackers on the planet. Forget every word that Jax has ever told her. And figure out how to change one teeny tiny thing--fate. Easy, right? Well...doable, at least. What are you waiting for? Scroll up and click buy now to begin a series that will suck you in and leave you wanting more.**Midnight Ice is a standalone, spin-off to Midnight Fire, a bestselling series with over 200,000 copies sold and over 5000 5-star reviews on Goodreads! Fans will enjoy special appearances from Kira, Luke and Tristan while falling in love with the new characters and new adventure of Midnight Ice.

I did not read the Midnight Fire series (or had even heard of it) before diving into this series. But if it's anything like this one, it will be worth a read.

Excitement, magic, betrayal and confusion make this a fast paced read which, even after the first two books, has the reader wanting more.

Pandora (aka Dory) is chronologically seen twenty but stuck in a much younger teenage body, since that's when she was turned. Now, as a vampire on the run from her past, she's turned into a thief. Thanks to her original blood and the ability to disappear—the exact ability which made her an outcast in the Titans—she's kept herself afloat in a human/supernatural world. That is, until her childhood friend and soulmate, Jak, shows up to drag her back to the Titans and to convince her to take the cure for vampirism. But he's not the only one causing her trouble. She's hunted by powerful vampires thanks to her successful heists, wanted by her father for reasons unknown to her, and haunted by a ghostly man, who claims he's her everything. Simply said, Pandora is at the center of a ton more trouble than she knew or even understands.

It took a couple of chapters for me to sink into this read. The writing is from Pandora's point of view but it kept the reader at a distance, making it hard to connect with her. First, when the other character began to interact with her and the action got going, the hook finally sank in. From there, the story grabs and doesn't let go. But I almost laid the book down before that point.

Pandora is an interesting character with many layers. On one hand, she's a hardened thief and does what she has to do, which sometimes means getting her hands dirty. On the other, she frees captives and has a hidden heart of gold. Little by little, her past comes to light, one she doesn't remember herself, and the reasons for her woven personality become clear.

There are a lot of unexpected twists in this book, some more logical than others. The author sews several different myths together to create a unique story and does this fairly seamlessly. It creates a rich background where even some of the more evil characters aren't easy to completely hate.

There is romance but it rides as unsettled as the rest of Pandora's life and doesn't cuddle in, but rather holds tension, uncertainty and distance. Which completely slides along with the other aspects Pandora faces, because this girl has a lot on her shoulders as it is.

In other words, despite the rocky beginning, this is an engaging read which is sure to thrill paranormal and urban fantasy fans.