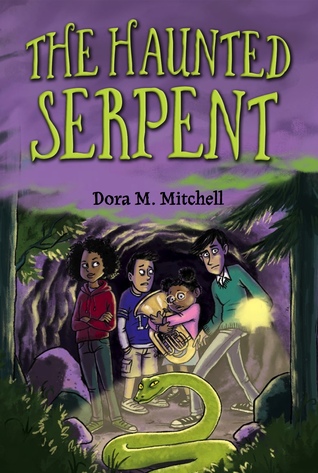 
Spaulding Meriwether, Thedgeroot Middle School's new resident weirdo and son of questionable television ghost hunters, just wants to fit in. But after a revenant chases him through the woods, Spaulding suspects there’s something afoot in Thedgeroot. (At least he thinks it’s a foot. Maybe it was a hand. It’s hard to tell when you’re running away.)
Then he notices the chimneys of the abandoned factory at the edge of town puffing smoke—and his dead next-door neighbor materializes, along with David, the missing pet boa constrictor that supposedly ate him. Spaulding can’t help wondering if these strange happenings have anything to do with his undead friends in the forest. Of course, Spaulding just has to investigate—but he may be biting off more than he can chew.


Ghosts, the living dead, and a huge conspiracy mix with tons of humor and a character who shows how hard school can really be.

Spaulding...or should his nickname be Boat?...has been handed over to live with his aunt while his ghost-hunting, TV- star parents keep him 'safe' from their job. Unfortunately, that means Spaulding is thrown into a new school where he knows he'll never fit in. To make matters worse, he swears he sees strange things going on in the forest, not to mention the huge boa constrictor which sunbathes on his aunt's roof. But soon Spaulding discovers that these are the least of his troubles.

Middle grade fans of mystery, ghosts, zombies and silly moments are going to enjoy this read. There's never a boring moment as Spaulding and his 'more or less' friends discover that magic, ghosts and other paranormal things might not be impossible after all. The mix of mystery with danger makes the tension high the entire way through, while still including enough funny moments to keep it light-hearted.

Spaulding is a treat. He's a nerd extreme, but he isn't the only one. To discover that everyone might have their own awkwardness makes him and his friends endearing. The other characters have their very own quirks, and it's easy to hate the bad guys and cheer the good ones on. The mystery itself is full of twists and turns, which keep the reader guessing until the end.

As an extra bonus, black and white illustrations pepper the pages, each offering Spaulding's hilarious and maybe insightful thoughts. This keeps the story fun to read while giving a good look into Spaulding's character. The funny 'Notes to self' which start off each chapter and giggles all on their own.

Dora M. Mitchell is a writer, illustrator, and children's librarian livin gin a small Northern Claifornia town that dates back to the Gold Rush. She writes surrounded by dark woods where the evidence of mining days can still be found hidden away among the trees—the inspiration for the setting of The Haunted Serpent. Her latest illustration work can be seen in The Boatman by Kat Hawthorne (BookFish Books, 2015). Visit her online at doramitchell.com
on July 04, 2018