Review: Everything I Know About You by Barbara Dee 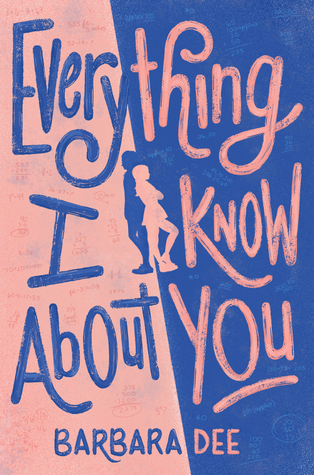 EVERYTHING I KNOW ABOUT YOU
by Barbara Dee
Aladdin
June 12, 2018
Middle Grade Contemporary
ages 9 to 12
320 pages


Misfit Tally is forced to room with queen bee Ava on the seventh grade field trip to Washington, DC, and discovers several surprising things about her roommate—including the possibility of an eating disorder—in this timely new novel from the author of Star-Crossed and Halfway Normal.
During a class trip to DC, twelve-year-old Tally and her best friends, Sonnet and Caleb (a.k.a. Spider) are less than thrilled when they are assigned roommates and are paired with kids who are essentially their sworn enemies. For Tally, rooming with “clonegirl” Ava Seely feels like punishment, rather than potential for fun.
But the trip is full of surprises. Despite a pact to stick together as much as they can, Sonnet pulls away, and spider befriends Marco, the boy who tormented him last year. And Marco just might “like” Tally—what’s that about?
But the uneasy peace in Ava and Tally’s room is quickly upended when Tally begins to suspect something is off about Ava. She has a weird notebook full of random numbers, and doesn’t seem to eat anything during meals. When Tally confronts Ava, Ava threatens to share an embarrassing picture of Tally with the class if Tally says anything to anyone about her suspicions. But will Tally endanger more than her pride by keeping her secret?
This is one class trip full of lessons Tally will never forget: how to stay true to yourself, how to love yourself and embrace your flaws, and how being a good friend can actually mean telling a secret you promised to keep…

With a little bit of humor, a spunky character and heaps of finesse, this book takes on a difficult topic not often mentioned in middle grade novels.

Tally's class trip is heading toward Washington D.C., something she's theoretically excited about...if it weren't for most of the people in her class. To make matters worse, the teacher has placed Tally and each of her two friends with their corresponding worst enemies ever. To help get through it, Tally starts a game. Her and her friends come up with tiny secrets for each one of their enemies and tell each other each day. While some personal secrets are silly and cute, Tally discovers something very confusing about her enemy—a notebook with numbers which don't appear to have any clear meaning. As she tries to uncover the secret of these numbers, she stumbles across something which changes everything she thought she knew about her worst enemy.

Eating disorders aren't one of the themes usually handled in middle grade books, but it's a topic which does, unfortunately, affect even some within this age group. While being a difficult problem to address, the author does a wonderful job in these pages and brings the message home without hammering it in or taking wrong turns along the way.

Tally is a bit of a strange character. She's a twelve-year-old who doesn't fit in, except with her two friends, but still packs a spunky punch. Her style is way out there, and even when she's unsure of her decisions, she holds to her individuality and faces the world. At the same time, she bites. The first chapters do not present a mild personality, but she attacks her enemies with snark and harshness. This gives her corners which aren't always likable but definitely realistic. Tally has things to learn.

Although this takes place during a class trip, this is a book about people and their relationships. Tally not only makes surprising discoveries about those who she considered enemies, but also about her own friends. The bounds of friendship and enemies bend and twist in this tale while staying down-to-earth and believable. Each character has something to offer, surprises of their own and brings fuel to the tale. This is a story about feelings, middle school drama, getting to really know people, and realizing that everyone has their own monsters to battle. In this sense, Tally's sharpness turns to careful fingers and kindness which offers inspiration and food for thought.

Barbara Dee is the author of The (Almost) Perfect Guide to Imperfect Boys, Trauma Queen, This Is Me Fro Now On, Solving Zoe (Bank Street Best Children's Books) and Just Another Day in My Insanely Real Life (Publishers Weekly starred review) and Truth or Dare. Barbara is one of the  founders and directors of he Chappaqua Children's Book Festival. She lives in Westchester County, New York with her family, tow naughty cats, and a rescue hound dog named Ripley. Barbara blogs at www.Frothemixedupfiles.com.
Read more about Barbara at www.BarbaraDeeBooks.com.

Email ThisBlogThis!Share to TwitterShare to FacebookShare to Pinterest
Labels: Barbara Dee, Everything I Know About You, Middle Grade Contemporary