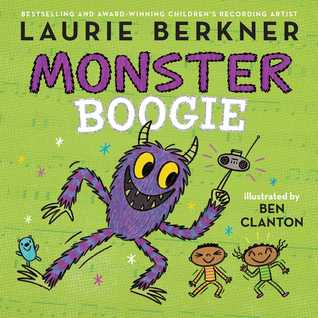 Laurie Berkner, “the queen of children’s music” (People), pairs the lyrics of her infectious hit song with Ben Clanton’s whimsical illustrations in this groovy and adorable picture book—a must-have for fans of Laurie, dancing, and all things monstrous!
I’m the biggest monster
that you’ve ever seen!
My eyes are purple
and my teeth are green.
I’m big and I’m scary,
you know what I mean?
And this is what I like to do…
Boogie away those bedtime fears and embrace your inner monster with Monster Boogie, based on Laurie Berkner’s irresistibly fun song and featuring lively, playful artwork by Ben Clanton!
I do the monster boogie.
So can you!
Rraaaahhh!

There's a monster in the bedroom, one with green teeth and purple eyes. He appears to be scary, at first. But this monster doesn't have roars and growls in mind. All he wants to do is boogie and wiggle.

Laurie Berkner's song comes to life in these pages, allowing an energy packed monster to come to life. The text is simple enough for even younger listeners to understand and, coming from the song, repeats itself. Although this does come across as repetitious at times, it also makes the phrases catchy for kids and easy forthem to 'read' along even when they can't read the words themselves. A possibly scary monster transforms into a source of giggles and will have young readers boogie-ing and wiggling themselves. Still, the message is clear—first impressions can be deceiving. Because this monster is anything but frightening.

The illustrations are bright and add just the right amount of silliness and excitement. While the phrases from the song repeat themselves, the action in the illustrations does not. It's the combination of these two which makes the book entertaining.

For those, who aren't familiar with the song or might want the chance to play it themselves, the music score is on the back of the book. But even without it, this is an easy to enjoy read which guarantees smiles for fans of silly monsters.


Recognized as "the queen of children's music" (People magazine), Laurie Berkner is a singer, songwriter, lyricist, author, and founder of Two Tomatoes Records.  She has released twelve bestselling, award-winning albums, was the first recording artist ever to perform in music videos on Nick Jr., and appeared regularly on the network’s Jack’s Big Music Show.  Laurie's music has graced the short-form animated series Sing It, Laurie! on 24-hour preschool television channel Sprout, and she has been a frequent  guest on Sprout's Sunny Side Up morning show.  Venturing into the theater world, Laurie has written music and lyrics for two Off-Broadway children’s musicals produced by New York City Children’s Theatre:  The Amazing Adventures of Harvey and the Princess and Wanda’s Monster.  A third NYCCT show featuring Laurie’s music and lyrics, Interstellar Cinderella, will open Off-Broadway in November 2017. What sets Laurie apart?  Her music speaks to kids without talking down to them, charming youngsters without boring grownups.  Laurie finds inspiration in her audience.  “I want to create songs that matter for children,” she says.  “I was singing once and saw a four-year-old girl shut her eyes and start swaying to the music.  I thought, ‘That’s the reason I got into music.’  It keeps me wanting to do more.”