Sale Blitz: Going Down in Flames by Chris Cannon 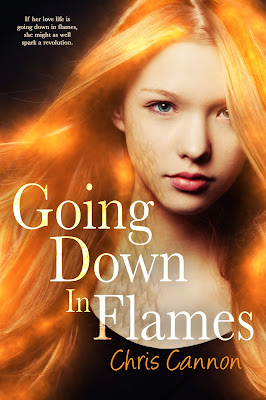 If her love life is going down in flames, she might as well spark a revolution.

Finding out on your sixteenth birthday you’re a shape-shifting dragon is tough to swallow. Being hauled off to an elite boarding school is enough to choke on.

Since Bryn is the only crossbreed at the Institute for Excellence, all eyes are on her, but it’s a particular black dragon, Zavien, who catches her attention.

Zavien is tired of the Council’s rules. Segregated clans, being told who to love, and close-minded leaders make freedom of choice almost impossible. The new girl with the striped hair is a breath of fresh air, and with Bryn’s help, they may be able to change the rules.

At the Institute, old grudges, new crushes, and death threats are all part of a normal day for Bryn. She’ll need to learn to control her dragon powers if she wants to make it through her first year at school. But even focusing on staying alive is difficult when you’re falling for someone you can't have.

Check out the Going Down in Flames series (click on images for Goodreads links): 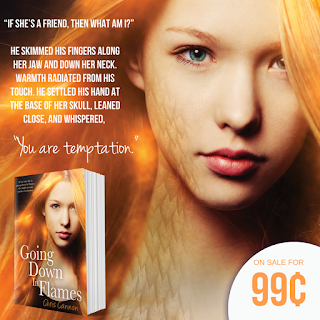 He blinked in confusion. “What do you want to know?”
Time to ask the million-dollar question. No matter the pain it caused, she needed to know. “Who is your intended?”
He shook his head. “It doesn’t matter.”
Wrong. “It matters if you plan to spend the rest of your life with her.”
“She’s a friend.” He didn’t meet her gaze.
Bryn heard a door close. Miss Enid and Valmont had retreated into the bedroom to give them privacy.
She inched closer. Electricity sparked between them, making the hair on the back of her neck stand up. “I need to know.”
He took a deep breath and met her gaze. “My intended is Nola.”
No. Freaking. Way.
Nola? His intended was Nola? How in the hell was she supposed to compete against the dark-haired Barbie? She couldn’t. Dropping her hand from his chest, she backed up a step.
Zavien closed the distance between them. “I swear. She’s a friend.”
Wanting to believe, she placed her hand over his heart and searched his eyes for the truth. “If she’s a friend, then what am I?”
He skimmed his fingers along her jaw and down her neck. Warmth radiated from his touch. He settled his hand at the base of her skull, leaned close, and whispered, “You are temptation.”
She held her breath as he lowered his head and brushed his lips against hers. Time seemed to stand still. His mouth moved against hers. Melting against him, she fisted her hands in his shirt and tried to pull him closer. He wrapped his arm around her waist, drawing her body flush against his.
Too soon, he pulled away. “I shouldn’t have done that.”
“I’m not sorry you did.” She traced her fingertips along his jaw. For so long, she’d been unsure of his feelings. Now she knew.

Chris Cannon lives in Southern Illinois with her husband and her three dogs, Pete the shih tzu who sleeps on her desk while she writes, Molly the ever-shedding yellow lab, and Tyson the sandwich-stealing German Shepherd Beagle. She believes coffee is the Elixir of Life. Most evenings after work, you can find her sucking down caffeine and writing fire-breathing paranormal adventures or romantic comedies.

Email ThisBlogThis!Share to TwitterShare to FacebookShare to Pinterest
Labels: Chris Cannon, Going Down in Flames, YA Fantasy