When I put this post up, I had to smile. Christmas already??? (Yes, that holiday does seem to come so quick again and always sneaks up on me.) But not this time!
This is the first book to a delightful series, and since my mother always told us during those ridiculously hot summer days that cool thoughts help, I was more than thrilled to have a chance to review this one and present it before the upcoming months leave us dreaming of cooler moments. Plus, it's a fun read.

That's enough for my babbling because here's today's review! 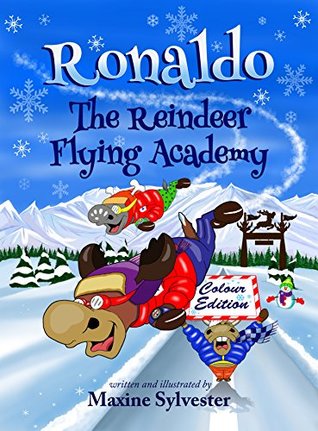 "MOVE OVER RUDOLPH - RONALDO IS HERE TO STAY!"
Ronaldo is the top flying cadet at the prestigious Reindeer Flying Academy. He dreams of getting his flying license and becoming one of Santa's reindeer, just like his hero, Vixen.
In the first adventure in the Ronaldo series, the second year flying cadets face their toughest ever flying test – The Endurance Challenge. Will Ronaldo be victorious and lift the silver cup? Or will mean brothers Dasher, Comet and Prancer ruin his chance for success?
"This should be a new Christmas classic!"
"I look forward to reading this book to my kids every year at Christmas. The story is incredibly entertaining and laugh out loud funny, even for parents!"
"This book has become a part of my family's holiday traditions!"


With a spin off of the ever-so-popular Rudolph and Santa Claus' reindeer story, this is a fun tale which guarantees giggles, snorts and introduces one cool little reindeer.

Ronaldo dreams of becoming a flying ace like Vixen someday, and he's sure he can do it. After all, his own grandfather was a legendary postal flying reindeer. . . too bad the older man has taken up knitting and made Ronaldo the most ridiculous stocking cap. In purple. When another day at flying school leads to an endurance test, Ronaldo wants to give his all. And this leads to a couple wonders that even he never dreamed were possible.

Although many of the characters in this tale are very familiar, the author manages to create a new setting which is similar but different enough so as not to come at odds with the original version. That in itself is a masterful achievement.

Ronaldo is a reindeer with a true boyish heart. The first pages take time to show him at home with his parents, and let his personality shine. We get to know Ronaldo on a personal level before his adventure takes off, and what a fun greeting it is! There's a lot of humor set into these pages--some of it slapstick, while other moments more subtly clever. Of course, there's a few burps and farts, which is sure to make younger readers laugh. And all of it fits nicely into the adventure.

This isn't a long tale, which makes it great for even more reluctant readers. Plus, it works well as a read-aloud. The text is in a larger print for easy reading and there bright, colorful illustrations speckled throughout the story. In other words, it's laid out for a nice read.

Good feelings abound in this book, and it has an inspiring message kids can carry over into their own lives. Not only is Ronaldo's determination cheer worthy, but the wise words of his grandfather are repeated time and again, ones which kids can repeat themselves. The tale isn't only fun but leaves a sense of warmth. It's hard not to love Ronaldo and look forward to his next adventure. 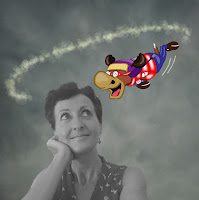 Maxine Sylvester was born in London, England. She grew up with a passion for Winnie the Pooh and Paddington Bear. She also loved anything Disney and enjoyed drawing the characters.
Maxine's love of 'fun' art grew and she had the privilege of being mentored by cartoonist and caricaturist, Steve Chadburn. She completed further studies in children's book illustration with talented artist and illustrator, Jan Nesbitt.