Review: Road of a Warrior by R.K. Lander with Giveaway! 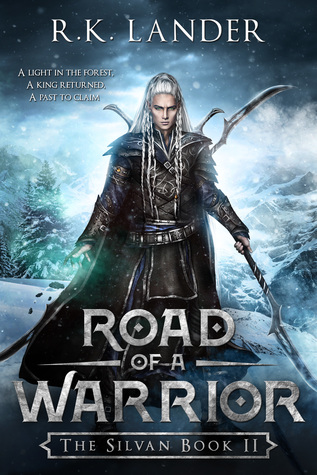 ROAD OF A WARRIOR
The Silvan, Book II
by R.K. Lander
YA Fantasy
300 pages


A light in the forest, a king returned, a past to claim …

Fel’annár is an immortal half-blood warrior from the Deep Forest, an orphan whose questions were never answered. With a dream of becoming a Silvan captain in an army ruled by the Alpine elves, he is sent to protect a prince of the realm on a journey to Tar’eastór, land of the mighty Alpine elves and of Fel’annár’s own father – whoever he was.

His nascent powers that emerged during his first patrol as a novice warrior will continue to evolve as his shrouded past finally surfaces. The truth he never thought to hear will thrust him onto a path strewn with political intrigue, discrimination, danger and self-discovery.

Meanwhile, a failing king will rise from the ashes of grief and reclaim his place as leader of the Great Forest. Warriors will battle the enemy on the borders, while at court, councillors will clash over the racial divide that is pulling them apart.

They say that civil war is coming, but one elf can avoid it – if he can embrace his past, control his powers and accept the role he is destined to play.

From warrior to master and beyond, Fel’annár is The Silvan who can restore peace in the Great Forest, or cast it into eternal chaos.


Fel’annár is a half-breed elf, one whose appearance is that of the proud Alpine elf even though he has been raised and sees himself as a Silvan. He's proven himself as a warrior in battle, but still is looked down upon by the Alpine elves. At least, until he learns of his true identity. Now, he must come to terms with a past he doesn't want to admit exists, while finding his new role between the two elf factions and coming to terms with himself. And all of this with the threat of a civil war looming over him.

I did not read the first book in this series, which was a mistake. This book takes off where the last one ended and dives right into a complex tale and world. It took me several pages to figure out who the characters were as well as their place in the world around them, and that with quickly changing points of view. In other words, this is not a stand-alone.

Elf and epic fantasy fans are sure to love this book. The world building is extremely well done, allowing the scenes and battles to come to life while keeping the wonderful feel of a rich fantasy world alive. The characters each have their own worries, problems, pasts and agendas. Some are easy to like, others easy to hate, and yet others fall into the gray area. By changing points of view, the layers of intrigue and threats deepen and grab hold. It's hard not to cheer for Fel’annár and feel for him as he tries to find his footing.

The atmosphere of war, power plays and prejudice are strong and convincing. Fel’annár is up against inner battles as well as outer ones, and all the while carries the pride elf fans love. And with the very difficult path he has to follow, it will be interesting to see what happens next.

I am one of the biggest elf geeks I have ever met. First inspired by the world of Tolkien, I began writing short stories, until the idea of the Silvan popped into my head. That was no short story but a sprawling 900 pages of epic fantasy.
The Silvan is my first publshed work, an epic / military fantasy with paranormal overtones. The story revolves around the figure of a Silvan elf, Fel'annar. The first in the series, Path of a Novice was published April 2017 and the second book is due to launch 28th April, 2018. A projected third book should be available in 2019.


I love connecting with readers, so please pop in and say hello. I’d love to hear your feedback and comments.

Email ThisBlogThis!Share to TwitterShare to FacebookShare to Pinterest
Labels: Giveaway, R.K. Lander, Road of a Warrior, The Silvan, YA Fantasy