Review: How to Trick the Tooth Fairy by Erin Danielle Russell 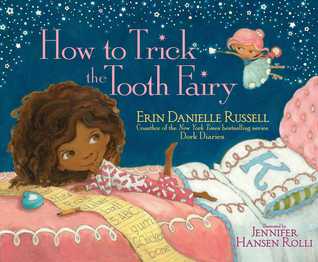 Kaylee loves pulling pranks: from dropping water balloons on passers by to even tricking Santa Claus, she’s a prize-winning prankster!
But is she the Princess of Pranks? No! That title is held by none other than the Tooth Fairy. But when Kaylee loses a tooth and the Tooth Fairy goes about her usual tooth-taking business, Kaylee pranks her with a fake frog. As Kaylee and the Tooth Fairy try to out-prank one another, things get way out of hand, until the two finally see eye and eye and decide to share the crown!

Kaylee is a serious prankster. She pranks in the morning and at night. No one is safe from her. But when she decides to pull one over on the Tooth Fairy, something unexpected happens—the Tooth Fairy is a prankster herself. The two battle it out, leading to disaster and something more.

The cover and title already demand attention, not only thanks to the little girl's sinister smile, but glitter abounds on both sides. This isn't a pink, glittery book. Rather, it gets pretty gritty. Kaylee isn't one to trust, and the first pages make that clear. Her pranks aren't harmful or spiteful, but she's got a slightly devious side. It makes it hard to like her and almost brings a sense of justice when the tooth fairy fights back. It's clever and silly in a slightly devious way.

The battle which follows is funny and a chaotic disaster. While I, as a mom, wasn't sure what to think of the back and forth, my daughter loved it. The Tooth Fairy definitely looses her sweetness in this book, and shows a slightly naughty side. While the pranks mount, they are never mean or hateful, even when they end in near disaster. But it's exactly this which turns the story around and leads to a more encouraging ending.

This isn't a loving, warm, sweet book. . .not at first, but it does have an important message and will have young listeners laughing.

I received a complimentary copy and enjoyed it enough to want to leave my honest thoughts.