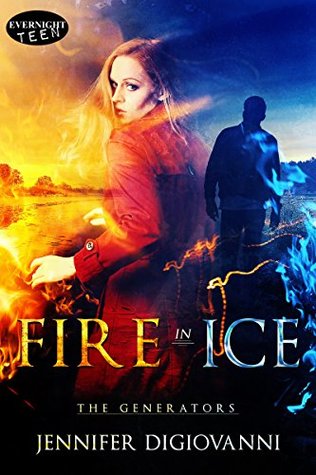 FIRE IN ICE
The Generators, Book One
by Jennifer DiGiovanni
Evernight Teen
YA Paranormal / Superhero


After suffering a rare illness, straight-A student Cara Scotto struggles to deal with lingering side effects. Refusing to admit she can’t handle the disruptions in her otherwise normal life, she tries to move on and heal.
Alexander DeMarsh is unhappy about returning to his small hometown for three weeks. He prefers living in the city, where he attends an elite boarding school far away from his overprotective parents. Sure, they have reason to worry about him. As a Generator, Alex’s body constantly manufactures supernatural energy that’s often difficult to control.
Over winter break, Alex runs into Cara and picks up on the powers they share. Soon, he realizes Cara is the only person in the world who has any chance of understanding him. But first, he needs to find a way to draw out her supernatural abilities without revealing too many secrets of his own.


Fast-paced and a nice twist on superhero powers.

Cara is a smart girl who doesn't carry much baggage and enjoys life and high school, while, of course, looking forward to the day she graduates. When she suddenly becomes ill and lands in the hospital with a rare disease, her life takes a massive turn. Although she's soon back on her feet, she feels like she's constantly on overdrive. To add to the stress, the famous son of the richest family in town is back for Winter break and, for only heaven knows which reasons, seems to be stalking her. Not only that, but there's something strange about him. As Cara finds herself pulled into an unbelievable life, she begins to wonder if she can trust Alex or not.

This is a nice read. It packs all the wonderfulness of the drama of a YA romance, rolls it in layers of dark secrets, and tops it off with amazing and developing superpowers. Cara is a great character. While uncertain and a little naive at times, she also packs a good amount of self-esteem and doesn't let anyone push her around. Her lack of baggage in the beginning is refreshing and makes her easy to connect to—just an average girl.

The explanation behind the superpowers and the 'civil war' surrounding it aren't really explained with much detail. Even the full extent of what each person can really do is left foggy around the edges. While this does leave many questions open, it doesn't really hurt this first book. There are many things still left to be explained, but much of this will probably appear in the rest of the series. As it is, the reader learns with Cara and the concentration remains on her own struggle to discover the beginning layers of her emerging powers and the new world it's opening up to.

There are dark secrets and layers of intrigue, and while the 'true' evil man only takes a backseat in this first book, there are enough secrets and questions to make the initial question of who to trust strong enough to carry this plot. Each character carries their own agenda and history, which adds a nice amount of depth. And there is a completely unexpected twist or two.

And there's romance. Of course. It hits with a 'love at first sight' and rounds it off with the roughness of mistrust and discovery. It's not completely smooth but works okay. Cara's initial boyfriend comes across great in the beginning. Alex's appearance drives in a rather sudden, not completely explainable, break-up, which left with a remaining kink. This whole side still needs more time in the upcoming series too. Which means there's tons to come in the next books, and if they're anything like this first one, they'll be entertaining reads.
on May 13, 2018

Email ThisBlogThis!Share to TwitterShare to FacebookShare to Pinterest
Labels: Fire in Ice, Jennifer DiGiovanni, YA Fantasy, YA Paranormal, YA Superhero