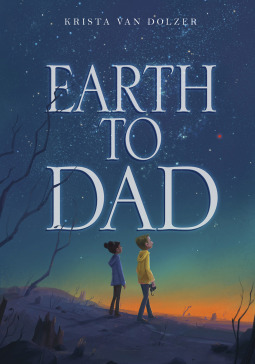 
Eleven-year-old Jameson O'Malley's dad is on Mars. The only way to see him, other than squinting into the night sky, is through the JICC - short for Jameson's Interplanetary Communication Console. Jameson thought the JICC would help shorten the millions of miles that stretch between Base Ripley and Mars, but he's is starting to realize no transmission can replace his real, actual father. When a new family moves onto Base Ripley, Jameson makes an unlikely friend in Astra Primm, daughter of the country's leading climatologist, who died in an explosion on Mars. But as Jameson's friendship with Astra grows stronger, he begins to notice the flaws in his own family. Mom is growing distant, and something is wrong with Dad. He's not sending transmissions as frequently as he used to, and when he does there are bags under his eyes. Jameson begins to realize there's more to the story than he knows - and plenty people aren't telling him. Determined to learn the truth and discover what happened to their parents, Jameson and Astra embark on a journey exploring life, loss, and friendship that will take them to the edge of their universe.

While taking a ride to futuristic Earth, this book battles the questions surrounding a dying world, people's hopes, and, most importantly, learning to live with the loss of a loved one.

Eleven-year-old Jameson lives on an Earth, which has been forced out of its orbit and is slowly approaching the sun. While his father is one of the heroes selected to head for Mars to work on a plan to save the human race, Jameson and his mother live in a governmental supported community. Although Jameson attends a normal school, he's a bit of a loner. The most important thing in his life is his JICC, a device his father built with him shortly before he left, which allows Jameson to send and receive communications from his father on Mars. When a new girl moves into the house next door, one whose mother recently died on a similar Mars mission, Jameson decides its time to make his first friend. The results change his life, especially when his JICC breaks and she agrees to help him repair it.

This is a story which requires a box of tissues. . .maybe even two. The setting itself already sets a melancholy atmosphere; the Earth is on a crash course with the sun. Although life is fairly similar to our own modern world, there are distinct differences—dying vegetation, deadly UV rays, hoverboards, and more. The author does a fantastic job at building a realistic world, which is easy to settle into and picture the surroundings through every scene. It's futuristic but still familiar enough for readers to easily identify with.

The characters are true to life, each one taking on a distinct role and personality. They act realistically, carry their own flaws, but still, are very supportive and kind in their own way. This secure foundation lays the perfect buffer for the tough topics addressed in the book and keeps it from growing too depressing.

Jameson is a great kid. He's pretty separated from the rest of society, although he lives in the middle of the compound and attends school. At first, this appears to be a result of him trying to remain off the radar, since his father is very well known. But as the story progresses, it becomes clear that much of this has to do with his mother's over-protectiveness. While Jameson comes across very natural, at times, he behaved younger than eleven. Still, his other genius side balances it out and makes him easy to connect to.

This is not a happy story. While there are many adventurous moments, a sad tone hangs like a nearing storm. There is hope, friendship and many, many emotional moments that make a reader sigh. It's well written. Very well and, for most of the tale, flows smooth and holds the reader in the pages. But as the last chapters roll through, the pacing changes a little. Jameson is very naive when it comes to the world outside, which could be a result of his overly protective circumstances. Still, he's slow to take obvious hints. When the moment of his big action strikes, the ending is a little rushed. It also becomes clear that information surrounding the Mars project and background is still missing to make things clearer.

This is a touching read, and extremely well done. While entertaining, it's one that will make readers think and leave a touch of sadness behind. The ending wraps things up nicely, but there is still many things left open to let the mind wander with its own fantasies.
on May 24, 2018