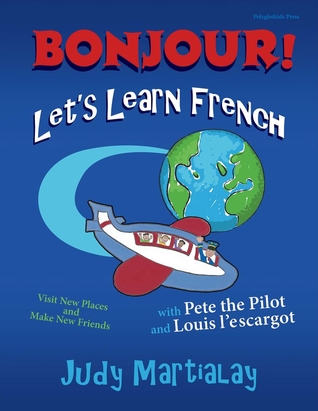 Bonjour! Let’s Learn French gives children roughly 6-10 an early and fun introduction to French. Kids board Pete the Pilot’s magic airplane en route to France. On board, they learn their first French words and phrases. In France, they meet Louis, l’escargot and his friends, and follow their adventure while learning French and absorbing the culture.

The French words and expressions are introduced gradually during the story, which is told in English. Back home, kids can use and expand their French with family and friends with fun activities. These include a treasure hunt, daily expression, and a skit. The Culture corner explains some of the cultural differences that children encounter during their stay in France. This section includes a traditional French song. In the crafts section, children learn about impressionist art and how to make an impressionist-style painting., as they are encouraged to use their French. Easy to use, whether or not parents know French. The Audio is free and downloadable at website mentioned in the book.

It is my wish that all children have the opportunity to begin learning a language early. Although anyone can start to learn another language at any age, children will have more time to become proficient, and they have the ability to acquire native-like pronunciation. In the U.S., there are relatively few programs that introduce a language in elementary school. Parents wishing to give their children the many benefits of knowing another language can “homeschool” French for their kids. Bonjour! Let’s Learn French is a great way to start. Parents can learn or review the language themselves. I hope that parents will also ask their local elementary school to implement programs of Foreign Language in Elementary School (FLES)

Ready to dive into French? With cute characters, fun, facts and a nice level of excitement held the whole way through, this book allows kids to get a great first glance into the language and some of the culture as well.

Although short, this book holds quite a bit to get started in the French language. Unlike many language books, which hit basic words and phrases with descriptions and let them mount into sentences along the way, this starts with a tale. By plopping French terms into a story, and then letting flow right along with the English ones, its easy to pick up the words and fun too. Pete, Louis and the rest of the characters keep this book from getting dry and make it wonderful for the intended audience level. . .and adults as well.

After the tale, there are exercises, more words and even a bit about French culture and such. So readers get a basic glimpse into France. While readers can dive into the book themselves, this one works better if there is some nearby to help with questions. The story in the first part works well for readers to grab the French terms on their own, but the other sections will require a little assistance at times. The set-up of the book fits especially well for a homeschooling environment or parents wanting to assist their children with French at home. The audio version available on the author's website is highly recommend, since it offers assistance on pronunciation. If the adult or helper does not have a basic grip on French themselves, the audio version is necessary.

This is a fun dive into learning French, and the story technique used in the beginning earns bonus points. But it's not great to hand kids on their own, but rather should be seen as a nice and very fun tool to dive into the language. 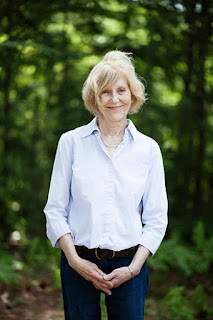 After graduation from , Judy Martialay spent two years in teaching English conversation in an elementary school in and a middle school in .
She taught French and Spanish on the elementary, middle and high school levels during her 30+ year teaching career.
Since retirement, she has devoted time and effort to public advocacy for foreign language study with the New York State Association of Foreign Language Teachers.


She has an M.A. in French literature from .