Castles in the Air by Sangeet Sharma 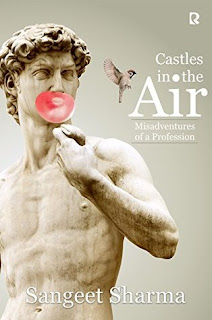 
Laughter is said to be the best elixir and the book is a satire on architecture written by one who knows the bricks and concrete of the profession by heart.

The author, an architect himself, delves into the journey of a professional practice. The book is witty with acerbic humor.

Word by word, sentence by sentence, page by page, every scene unfolds like a screenplay, leaving the reader amazed with the brutalities of life in architecture, and life itself.

Sangeet Sharma is a practicing architect in Chandigarh. He is a partner in SD Sharma & Associates, a well-known firm of the region founded by his father Ar. SD Sharma, an eminent Architect. Widely acknowledged and awarded Ar. Sangeet Sharma commands an undisputed international reputation in profession. Carrying forward the legacy and vocabulary established by his father he is fascinated by geometrical forms.
By looking at every drawn line as built spaces he follows a certain rationale to his reflective practice. His buildings are based on sustainable applications.


He is a multifaceted personality. He is a poet, Architectural critic, writer, artist and author. He has authored Architecture, Life and Me, published by Rupa and Co., a memoir that takes an all-round view of the profession.