Review: Elle of the Ball by Elena Delle Donne 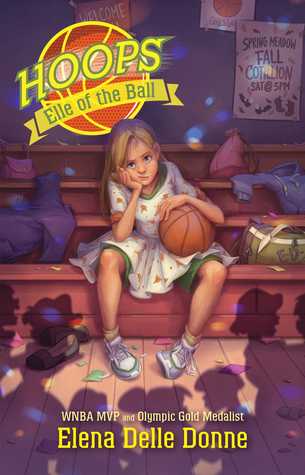 
Elle Deluca is a seventh grader who is tall—not just sort of tall. She’s six feet tall. And for a twelve-year-old girl, this means that her basketball team has high hopes for her changing positions and becoming their starting center. But a new position is not the only footwork she has to learn. Her class’s dance unit in gym is coming up, and that means she has to learn ballroom dance steps with a boy much shorter than her—and perform publically for a grade.

This isn't only a book about a girl who plays basketball, but it dives into problems many sixth through ninth graders face.

Elle has a problem after summer break. She's tall. Super tall, and while her basketball team sees this as a chance for a great season, she's trying to figure out how to handle her changing body. Not only does she seem to have troubles handling her long legs and big feet, but a new challenge comes at her when she's faced with ballroom dancing.

There aren't many books out there, which center around middle grade girls and basketball. So this one is a treat in that sense alone. But this one goes a step further than that. Elle is a pretty average girl, except for the fact that she's a giant when compared to other girls her age. Her uncertainty and self-criticism is something very common for the age group, as kids try to figure out what to do with their developing bodies and where it puts them. But it's so much more than that. Even seemingly ridiculous things like ballroom dancing for a class pose problems as she has to find a dress and deal with dancing with someone much shorter than her. It's these types of 'little' problems kids will connect to and understand Elle's difficulties and uncertainties.

Elle isn't alone in this but has friends and understanding parents at her side. It's a wonderful balance between figuring things out for herself, while having the extra support when needed. The friendships are inspiring. . .not always perfect. . .but as they should be.

The author brings across a realistic, middle grade world. The concerns, actions, reactions and hopes fit the age group well. Some of the dialogue is a little unnatural at times, but not enough to bother the flow of the story. There's always something going on, and it's easy to empathize with Elle as she figures things out. The basketball scenes and how the age group views the sport are spot on, which will please basketball fans.

Girls who like basketball and tales of the troubles of growing up during middle grade are sure to enjoy this tale.

Elena Delle Donne has been a professional women's basketball player since 2013, when she was selected by the Chicago Sky second overall in the WNBA draft. She was the 2015 WNBA MVP and won the gold medal with the USA's women's basketball team in the 2016 Olympics. She is the global ambassador for the Special Olympics and became the first national ambassador for the Lyme Research Alliance. Elena also plays host to Delle Donne Academy, a basketball camp that runs throughout the year, where she mentors and coaches girls ages seven to eighteen. She now plays for the Washington, DC, Mystics.