Sneak Peek: The Temple of the Crystal Timekeeper by Fiona Ingram with Giveaway

BeachBoundBooks is pleased to be coordinating a Blog Tour for the children's adventure book written by Fiona Ingram, Temple of the Crystal Timekeeper (The Chronicles of the Stone). The tour will run from February 26 - March 19, 2018. 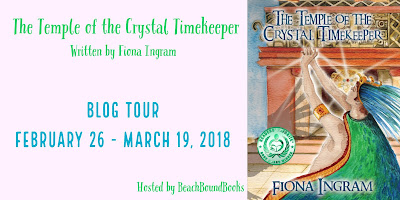 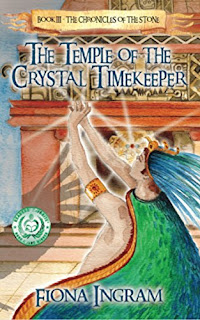 The Temple of the Crystal Timekeeper
The Chronicles of the Stone, Book 3 by Fiona Ingram
Bublish, Inc
November 17, 2017
Children's Adventure
318 pages


Description: Continuing the adventure that ended in Britain just a short while ago, cousins Adam and Justin Sinclair, with their friend Kim Maleka, are now hunting for the third Stone of Power, one of seven mysterious stones lost centuries ago. The third stone might be located in an ancient city, hidden in the depths of the Mexican jungle.When their small plane crashes in the jungle, Adam, Justin, Kim, and James are rescued by an uncontacted tribe. James, who is wounded, must stay behind as the kids, with only a young boy, Tukum, as their guide, make their way through the dense and dangerous jungle to find the city. River rafting on a crocodile-infested river and evading predators are just part of this hazardous task.

Of course, their old adversary Dr. Khalid is close behind as the kids press on in search of the lost city of stone gods. But he is not the worst of their problems. This time Adam will clash with a terrible enemy who adopts the persona of an evil Aztec god, Tezcatlipoca, and is keen to revive the ancient tradition of human sacrifice. Adam, Justin, and Tukum must play a dreadful ball game of life and death and maybe survive. Will they emerge alive from the jungle? Will Dr. Khalid find the third Stone of Power before they do?

A guard turned Adam round to face Smoking Mirror again. It was horrible being so close to this evil man. He seemed like a giant, and his gaze bored into Adam as he leaned down from his throne to stare at Adam. His eyes were cold, hard, and utterly pitiless.

“Oh, but he is very … very special. In fact, quite extraordinary. I did not realize the true significance before, but now I see it.” Smoking Mirror spoke in a silky whisper as he stared fixedly at Adam. “You see, this boy has the fire hair and the pale skin of the god Quetzalcoatl who came to my land from far across the sea. This boy also bears the mark of an ancient civilization, yes?”
“Er … yes,” said Dr. Khalid in a sulky tone, shooting a quick, angry glance at Adam that seemed to say, “Now look what you’ve done!”
“In fact, the mark is from your civilization, no?”
“No … er, I mean, yes,” Dr. Khalid gabbled. “It is the ankh, the sign of life.”
“The sign of life?” Smoking Mirror shouted. “Then we will extinguish that life!”
He leaped up and screamed an announcement in the people’s language. The crowd remained silent except for a few women who began crying. But not a minute later, a deep collective groan arose from the gathering. Smoking Mirror’s warriors cheered and clattered their weapons against their shields as he continued with his speech.
Adam turned his head a little to one side, trying to catch Tukum’s eye. “What’s he saying?” he whispered, although he sensed already that it was bad.
Tukum’s head drooped. “He says this is the ultimate battle, because you represent the Aztec god Quetzalcoatl, or Kukulkan to the Maya. He says the game will prove who is the ultimate winner.”
Adam could hardly speak. His heart had begun pounding so hard it felt like a hammer against his ribs. He was breathless for a moment. This was the confrontation Kotz had spoken of, but it would be impossible to defeat Tezcatlipoca.
“So he thinks we’ll lose?” Adam asked.
“Yes,” said Tukum.
“What if we win?” asked Justin. “It’s possible.”

-Tukum gave him a despairing look. “How can we win?”

Other Books in the Series

Book One: The Secret of the Sacred Scarab

This action packed Middle Grade/tween adventure tests the courage of cousins Adam and Justin Sinclair from the moment they arrive in Egypt. Can they survive a harrowing journey to discover the secret of the sacred scarab while being pursued across the desert by a deadly foe?

The Secret of the Sacred Scarab is the kind of adventure readers love! The fast-paced action, the evil villain, the secrets of the past, and the mysterious ancient setting make this a sure-hit favorite for both young and young at heart explorers.

Book Two: The Search for the Stone of Excalibur

Description: A modern day adventure as our protagonists search for Excalibur and the treasures it holds! This is a must-read for Middle Graders keen on action, adventure, and Arthurian stories! Continuing the adventure that began in Egypt a few months prior in The Secret of the Sacred Scarab, cousins Adam and Justin Sinclair are hot on the trail of the second Stone of Power, one of seven ancient stones lost centuries ago. This stone might be embedded in the hilt of a newly discovered sword that archeologists believe belonged to King Arthur: Excalibur. However, their long-standing enemy, Dr. Khalid, is following them as they travel to Scotland to investigate an old castle. Little do they know there is another deadly force, the Eaters of Poison, who have their own mission to complete. Time is running out as the confluence of the planets draws closer. Can Justin and Adam find the second Stone of Power and survive? And why did Aunt Isabel send a girl with them?

Join Justin and Adam as they search not only for the second Stone of Power, but also for the Scroll of the Ancients, a mysterious document that holds important clues to the Seven Stones of Power. As their adventure unfolds, they learn many things and face dangers that make even their perils in Egypt look tame. And how annoying for them that their tag-along companion, Kim, seems to have such good ideas when they are stumped. 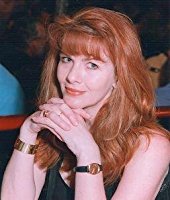 I am a children’s author, but up until a few years ago, I was a journalist and editor. Something rather unexpected sparked my new career as an author—a family trip to Egypt with my mother and two young nephews. We had a great time and I thought I’d write them a short story as a different kind of souvenir…. Well, one book and a planned book series later, I had changed careers. I have now published Book 3 (The Temple of the Crystal Timekeeper) in my MG adventure series Chronicles of the Stone, with many awards for the first book, The Secret of the Sacred Scarab, and a few for Book 2, The Search for the Stone of Excalibur, and one already for Book 3! I also teach online novel writing for aspiring authors and I find that very satisfying. Relaxation time finds me enjoying something creative or artistic, music, books, theatre or ballet. I love doing research for my book series. I love animals and have written two animal rescue stories. I have two adorable (naughty) little dogs called Chloe and Pumpkin, and a beautiful black cat called Bertie.

Prize: One winner will receive a $25 Amazon gift card or $25 PayPal cash prize, winner's choice Giveaway ends: March 19, 11:59 pm, 2018 Open to: Internationally How to enter: Please enter using the Rafflecopter widget below. Terms and Conditions: NO PURCHASE NECESSARY TO ENTER OR WIN. VOID WHERE PROHIBITED BY LAW. A winner will be randomly drawn through the Rafflecopter widget and will be contacted by email within 48 hours after the giveaway ends. The winner will then have 72 hours to respond. If the winner does not respond within 72 hours, a new draw will take place for a new winner. Odds of winning will vary depending on the number of eligible entries received. This contest is in no way sponsored, endorsed or administered by, or associated with Facebook. This giveaway is sponsored by the author, Fiona Ingram and is hosted and managed by Stacie from BeachBoundBooks. If you have any additional questions feel free to send an email to stacie@BeachBoundBooks.com.

Email ThisBlogThis!Share to TwitterShare to FacebookShare to Pinterest
Labels: Children's Adventure, Fiona Ingram, Giveaway, The Chronicles of the Stone, The Temple of the Crystal Timekeeper