Mommy's Day with a review: Last Stop In Brooklyn by Lawrence H. Levy!

Every so often, I highlight a book for the adult audience. . .after all, Mom's and Dad's like to read too. Today, is an historical mystery with very strong historical ties and plays in the 1890's with actual, historical characters. The mystery does involve jaunts into the red-light district, but these never go into vulgar or elicit scenes. There is one elicit moment toward the end of the story, but it is quick. Upper Young Adults could read this one without any problem—it's definitely less than is presented in many YA reads. 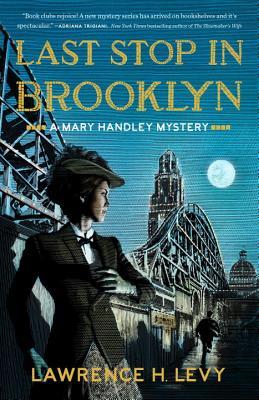 It's the summer of 1894, and an infidelity case has brought PI Mary Handley to a far corner of Brooklyn: Coney Island. In the midst of her investigation, Mary is contacted by a convicted man's brother to reopen a murder case. A prostitute was killed by a Jack the Ripper copycat years ago in her New York hotel room, but her true killer was never found. Once again it's up to Mary to make right the city's wrongs.
New York City's untouchable head of detectives, Thomas Byrnes, swears he put the right man behond bars, but as Mary digs deeper, she finds corruption at the heart of New York's justice system, involving not only the police, but the most powerful of stock titans. Disturbing evidence of other murders begins to surface, each one mimicking Jack the Ripper's style, each one covered up by Thomas Byrnes.
As Mary pieces together the extent of the damage, she crosses paths with Harper Lloyd, an investigative reporter. Their relationship grows into a partnership, and perhaps more, and together they must catch a killer who's still out there, and reverse the ruthless workings of New York's elite. It'll be Mary's most dangerous, most personal case yet.

This is the third book in the Mary Handley Mystery series, but it works very well as a stand-alone.

Mary is a very independent woman for the 1890's and a talented private investigator, who usually doesn't mess with infidelity cases. But for her friends, she'll do almost anything. While following her target, she bursts into a surprising situation and soon finds herself involved, not only in a much larger case, but one with much deadlier roots. The stakes are very high, and the case is much more complex than she would have ever expected.

I have not read the other books in this series but had absolutely no trouble diving into Mary's tale. The story is written in third person and switches points of view with the intricacy of a carefully woven web. There are many players in the field, most with their own agendas and not so ethical means. While they appear, at first, to have little to do with each other, the author draws them closer together in unexpected ways and with varying ties, making it hard to deduct who the true criminal is, or what exactly the various situations have to do with each other. It's well laid out, and well played.

Mary, herself, is a prickly character and not always easy to like. She's arrogant, defensive and snippy to a fault. It was difficult to fall in with her, but after a while, some of her exchanges and remarks did make her endearing. She simply stays at an arm's length away. But then, most of the characters carry this layer of arrogance like a second skin. While the dialogue was extremely entertaining to follow, most of the characters spoke with the exact same hauntiness and attitude, numbing natural individuality. Like Mary, many of them never feel familiar enough to gain much sympathy, but stay on the pages. Still, the villains are easy to dislike, and some characters are sympathetic.

While masterfully layering the mystery, the author also throws in a multitude of historical information, characters and tidbits. Most of this was very interesting and enriched the world. As an extra treat, the author notes at the end give a little more background concerning the historical figures involved in the mystery. The modern day ideas of equality, while nice to see, are pressed hard, which does, however, also flow along with Mary's own very stubborn and distinct personality.

Summed up, it's a well laid mystery with a very strong female investigator, tons of clever exchanges, and offers gems of small historical facts along the way.

I received a copy of this book through Blogging for Books.

LAWRENCE H. LEVY is a highly regarded film and TV writer who is a Writers Guild Award winner and a two-time Emmy nominee. He has written for various hit TV shows such as Family Ties, Saved by the Bell, Roseanne, and Seinfeld. Last Stop in Brooklyn is his third novel in the Mary Handley Mystery series.
on March 03, 2018