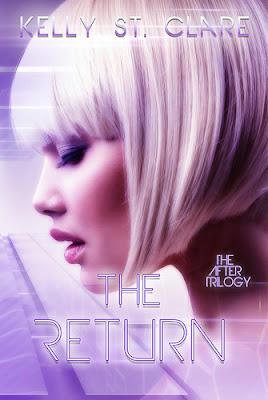 THE RETURN
The After Trilogy #2

Three months ago, Romy emerged from the cultivation tanks after a year floating inside.

Now she undergoes regular testing as doctors work to find out . . . well, she’s not exactly sure what.

The tests must have something to do with the reason she can’t remember her knot—the single lucid memory the other insane soldiers on Orbito Four still possess. Whatever the researchers are searching for, if it aids the soldiers in the deathly war against the lethal alien invaders—the Critamal—the excruciating pain is worth it.

But a grey-eyed man has other plans.

Boxed in and caught, Romy is taken hostage by people who shouldn’t exist! They dress in black and carry weapons she’s never seen in her genetically enhanced life.

Fifteen months have passed since her world shattered into bright red, ringing chaos. Things have changed—people have changed. How long until what was once as familiar as breathing is familiar once more?

Can the new Romy reconcile with the old, or will the two halves of herself remain locked in an internal battle?

And if a victor should arise from this silent war . . . will it be the part of her that kills without hesitation, without mercy?

All it takes is for the cracks to join and blood will pour.

You can find The Return on Goodreads 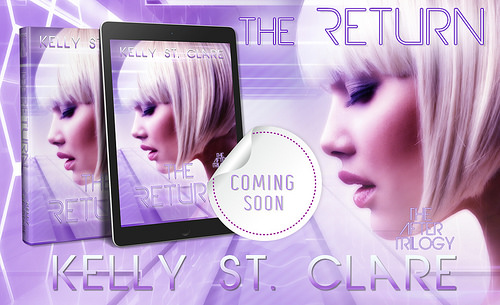 Romy strained for any hint of disturbance, but an eerie calm filled the space.
The electrodes and wires covering her arms and legs suddenly felt like restraints—a barrier preventing her from leaping from the bed and protecting herself. She closed her eyes and attempted to regulate her breathing.
Everything was fine.
There was nothing to—
The space station rocked as a muted explosion emanated from the clinic door. Her stomach dropped, and she nearly sat up before remembering Electrode Slapper’s withering order to stay still.
Romy held herself immobile, eyes darting side to side, senses stretched to maximum capacity.
Was that smoke creeping along the ceiling? Not the normal smoke from her burning hair—real smoke!
Nothing good could come from a fire onboard a space station.
Unable to deny fear’s curiosity, she turned to stare at the remaining male doctor, awaiting his order to evacuate. His attention was fixed on the door, the whites of his eyes showing his terror—of something. Romy watched as he scrambled from his seat, hands raised, stammering and babbling senselessly.
Not terror of something. Someone.
Romy inhaled sharply as a dart appeared out of nowhere, sticking deep into the side of his neck. The doctor staggered and slowly keeled over next to the bed, sending a screen smashing to the ground.
She jerked violently as his body rebounded off the floor before settling into unconsciousness.
The medi-tech surrounding her beeped, high-pitched and urgent, snatching up her distress and sounding it out for all the world to hear.
So much for playing dead. She took stock. At least five electrodes and their wires hung off each limb. Another ten on her torso and five more on her head. Extracting herself in a hurry wasn’t looking like an option. Heavy footsteps approached the bed where she lay, frozen. Mind racing. Several sets of footsteps, she realised—maybe ten. Romy swallowed, palms sweating where they touched her bare thighs.
A large shadow fell across her body.
Dread settled heavy in her bones.
A man dressed in solid black leaned over the bed, blotting her view of the white ceiling. A soldier. Unlike any she’d seen. Why wasn’t he dressed in white?
The man’s face was clean-shaven and as his scent reached her, she got the oddest sense of another time. Of warmth and. . . .
She blinked into his soft grey eyes.
With careful movements, the man moved the gun he carried so it slung across his back. The weapon was small, sleek—the complete opposite of the huge laser guns fitted on the space station.
Who was this person?
He reached for her, expression impassive, a slight tremor in his hands.
And spoke a single, hoarse word.
“Romy.”


Start this series with The Retreat! 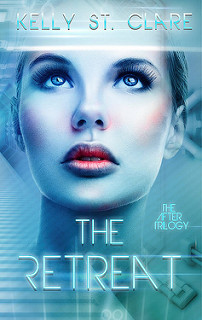 The Retreat is the first book in the After trilogy! You can get your copy of The Retreat on Amazon

Finalist in the YA books central annual book awards for best YA sci-fi of 2016.


The Retreat was awarded a Five Star badge by Readers’ Favorite in 2016.

Praise for Book One in The After Trilogy, The Retreat:
"superbly written" - Readers' Favorite ★★★★★

"I had very high expectations for this one and I'm happy to say that the book met them all and more." - Bookaholic ★★★★★ 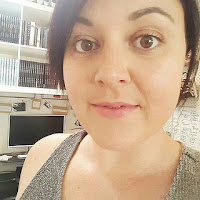 When Kelly St Clare is not reading or writing, she is lost in her latest reverie. She can, quite literally, drift past a car accident while in the midst of her day dreams, despite the various police sirens and chaos.

Books have always been magical and mysterious to her. One day she decided to start unravelling this mystery and began writing. Her aim: To write stories she would want to read.

The Tainted Accords was her debut series, and her second series, The After Trilogy, is now available.

A New Zealander in origin and in heart, Kelly currently resides in Australia with her soon-to-be husband, a great group of friends, and some huntsman spiders who love to come inside when it rains. Their love is not returned.

GIVEAWAY!
There is a cover reveal wide giveaway for the cover reveal of The Return! Three winners will each win a paperback copy of the Retreat. Open International!

Email ThisBlogThis!Share to TwitterShare to FacebookShare to Pinterest
Labels: Kelly St. Clare, The After Trilogy, The Return, YA Dystopian, YA Science Fiction