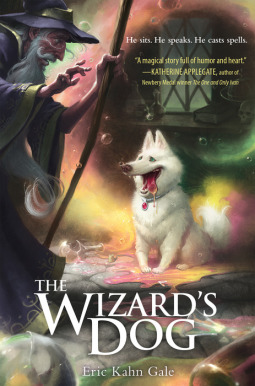 
Meet Nosewise. He’s spunky. He’s curious. And he’s a dog who can’t understand why his pack mates Merlin and Morgana spend all day practicing magic tricks. If it’s a trick they want, he’s the dog to ask! He can already Sit!, Stay!, and Roll Over!
But there’s no way Nosewise is Stay!ing when his master and best friend, Merlin, is kidnapped. There’s nothing Nosewise won’t do to get Merlin back, even if it means facing the strange Fae people and their magic-eating worms, or tangling with the mysterious Sword in the Stone. But it may take more than sniffing out a spell to do it!
Nosewise’s hilarious escapades and steadfast loyalty get him and his companions through King Arthur’s Dark Ages.


My son (11) snatched this book up before I got to it, so I thought it'd only be fair to start with his comments, especially since he is the intended age group. When my son grabbed this, he wasn't quite sure it would be his thing. But he ended up enjoying it so much that he read it within two days. His words- 'this is a really good book.' He claimed that the writing was easy to read. He'd go from chapter to chapter without realizing he'd read so many pages. And the dog. . .well, he simply loved Merlin's dog.

Nosewise is Merlin's dog. Nosewise likes being Merlin's dog, but he doesn't like sitting outside of a closed door everyday while Merlin and the young Morgana do their 'work'. One day, Morgana convinces Merlin to allow Nosewise into the room with them, and Morgana discovers that with a magic stone, Nosewise can speak.

I have to agree with my son-this is a good book. I'm not usually a huge fan of stories written from an animal's perspectives (never have been), but this book is the exception. Nosewise is extremely well written and delivers a narration worthy of even the brightest canine. His thoughts are simple but natural enough not to irritate or seem ridiculous. He's clever, humorous and slides seamlessly into Merlin and Morgana's world. And through Nosewise's eyes, the writing becomes so natural that the chapters flow by with ease. His world takes over completely and is a treat to get lost in.

This was a very refreshing version of the entire Merlin-Morgana-Arthur story. It stays light yet adventurous. Arthur is simply a nice, fun guy and makes a perfect fit to Nosewise. Even Morgana comes across as a natural, young girl with little sign of the heavy darkness, which is often found in tales with her character. In general, there's a lot of warmth in the pages and that radiates through despite the sticky situations Nosewise runs across.

Another bonus are the illustrations. Black and white sketches are sprinkled between the pages adding to the entire experience. They are simple but very well done and pop up at just the right time.

Summed up, this is simply an enjoyable read boys and girls ages 8 to 12 are sure to enjoy.


You can find out more about Eric Kahn and his wonderful books:
http://www.erickahngale.com/
on February 16, 2017