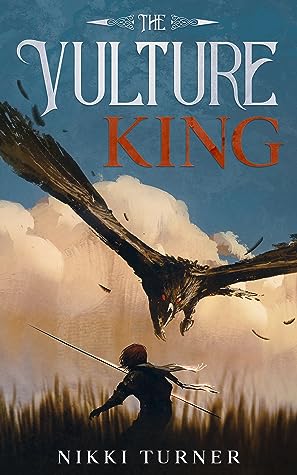 Orphaned Aram has survived alone for five years, his only friend a thieving magpie, who acts as his eyes. For in the Carrionlands, magic comes at a terrible price. It costs you your sight, hearing or voice.

When he rescues a voiceless girl, Bina, from being sacrificed to the Vulture King, he is taken in by an underground resistance group. They reveal that Aram's mother is alive, but the king is using her and other slave magicians to fuel his unnaturally long life.

With his mother's magic being rapidly drained, she doesn't have long to live. If Aram can find the Radix, a hidden magical power source, there's a slim chance he might be able to save her. But to get there, he must cross the Barrens where every living creature is out to kill you. That's if one of his new companions doesn't betray him first.

MY TIDBITS
Set in a bleak world, this is an exciting read with more than a few gripping twists and turns.
Aram comes from a people, who wield magical powers and are bonded to birds, who are their eyes and, for some, voices. His people are hunted by the ruling Vulture King and either killed or captured to be drained of their magical source until they die. After witnessing the death of his mother by the Vulture King, Aram is an orphan, who only wishes to survive and hide. He doesn't realize more of his kind still exist until one day turns everything around.
This is a short and packed read. I thoroughly enjoyed the bond between the people and their birds, and loved how this world was built and created. It's a bleak world and harsh (something more sensitive readers won't necessarily enjoy), but it's never graphic either. Aram is a wonderful character, who needs to build courage, self-esteem and trust. Even those around him are, for the most part, well developed and add the right tension and emotion to the tale. I especially enjoy Bina, a young girl who offers all the right support at the right time, while adding a wonderful sense of 'light' in the otherwise dark world.
Aram grows up on the street, is hunted by a very sinister king, and lives in a world of oppression and poverty. It's not a happy place and there's little humor added in. In some ways, it might have fit better in the young adult spectrum, but the author manages to keep it within a middle grade range and while dancing on the dark line, doesn't cross over into an area which would be too heavy for this age group. She also portrays the characters very age appropriate and makes them easy to connect with. The actions, thoughts, and decisions are easy to relate with and understand.
The tale is, in many ways, very well done. I was surprised that such a story can be packed into so few pages...and there's a reason for that. Things do move along quickly. While this does create an exciting read, there were moments which hit a bit too sudden. Especially the end and several of the characters would have benefitted from more build-up. But to say this really hurts or ruins the read wouldn't be fair. I can recommend it to fantasy fans and am sure they'll enjoy Aram and his bird as much as I did.
on November 23, 2020