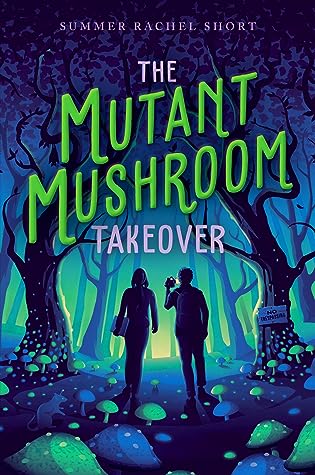 THE MUTANT MUSHROOM TAKEOVER
by Summer Rachel Short
Simon & Schuster
Middle Grade Science Fiction/Mystery
ages 8 to 12
Ever since Magnolia Stone’s scientist dad left Shady Pines to find a new job, Maggie’s been stuck in her gramma’s mobile home with her grumpy older brother, Ezra. Now she’s on a mission to put her family back together by winning the Vitaccino Junior Naturalist Merit Award.

When Maggie and her best friend, Nate, a wannabe YouTube star and alien conspiracy theorist, scout out a rare bioluminescent fungus, Maggie is certain she’s a shoo-in to win. But after animals around town start sprouting unusual growths and Ezra develops a bluish glow and hacking cough, Maggie wonders what they’ve really stumbled onto.

As things in Shady Pines become stranger and more dangerous, and conversations with her dad get complicated, Maggie must use her scientific smarts and Nate’s impressive knowledge of all things spooky to put things back in order and prevent these peculiar glowing mushrooms from taking over their home.
GOODREADS / AMAZON / B&N / BOOK DEPOSITORY

MY TIDBITS
Mystery lurks...and a bit of science, too...in all the right twisty-turny ways to make this one simply a ton of fun to read.
Maggie lives with her grandmother, while her father's off being an amazing scientist somewhere on the other side of the country—something she's not overly thrilled about. But Maggie's got a plan. Hoping to win a science contest to catch his attention, she heads off with her friend Nate into the forest and discovers the perfect project. Or so she thinks until mutated animals start popping up around town and even Nate gets hit with a strange and possibly deadly disease.
This is simply a wonderful mystery, which balances so many things. Maggie is an young girl, who wants nothing more than to have her family together but seems to be fighting the battle alone. Her entire situation makes her easy to sympathize with and root for right away. After all, her goals are only honorable and totally understandable. Her friend Nate, who loves scifi conspiracies and harbors Youtubing dreams, is the perfect match to make this a great pair to go on an adventure with. I could see middle graders wishing they could march through the forest with these two.
The adventure surprised me. While there are more serious tones in these pages thanks to Maggie's situation, it shoots off in a lot of unexpected twists and excitement. I was especially thrilled, when a real fungus, which makes 'Zombie' ants, comes into play. (Science and a fun mystery always catches my interest!) But this author doesn't stop there and weaves this fungus into an adventure, where things get worse...much worse than they first  appear. Of course, the duo can't find help from any adults (and I think it's awesome they were actually realistic enough to try this approach first) and end up having to battle everything alone. It's perfect for the age group. Plus, I love the imagination that went into it.
My only problems with this read...and these are slight because I enjoyed this one quite a bit...are Maggie's age and the ending. While Maggie is a wonderful character, she doesn't act like an eleven-year-old. I'd throw her into an early teen category...and this did bother me several times through-out the tale. As for the ending....well, I don't want to spoil anything, but it didn't seem to even offer a tiny bit of any steps into solving the initial issue. It left me feeling a little frustrated and wondering why the entire adventure took place.
But I'm definitely recommending this read. Not only are mystery fans going to like it, but fans of quirky adventures, deadly issues, and middle grade kid power are going to get lost in these pages. It's also a great way to slide in a little science because this one covers an area most readers have probably never heard about (adults will most likely be in the same boat)...and it will catch their interest.
on November 06, 2020