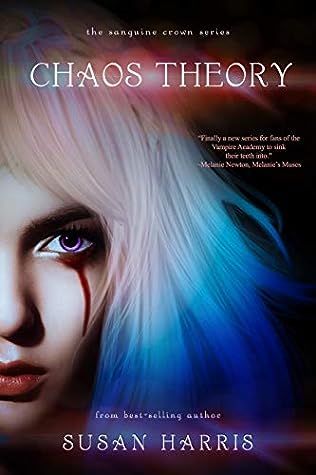 Everything you thought you knew about vampires is wrong…
Chaos Theory brings vampires back in popular form. This new series pays homage to the classics, while breathing fresh and revitalized life back into the genre.
“Finally, a new series for fans of Vampire Academy to sink their teeth into.”
-Melanie’s Muses

The vampire race is on the brink of extinction, and their fate now rests on the shoulders of an unlikely pair. Ryan Callan might be a badass seventeen-year-old with a mouth as sharp as her sai, but surviving the loss of her parents has come at the cost of isolating herself from everyone—even her best friend, Crowned Prince Nickolai.
When Nickolai is sent to integrate with the humans, Ryan is tasked with watching over him and ensuring his safety. But when a rogue vampire threatens to reveal the existence of vampires to the world, Ryan and Nickolai must put aside their differences to keep their world a secret.
Now, thousands of human lives are at stake… and so is the entirety of vampire kind.
Perfect for fans of Vampire Academy by Richelle Meade and Slayer by Kiersten White, Susan Harris’s young adult vampire romance is here to prove that vampires are back, and they’re more enticing than ever.
Future installments in The Sanguine Crown series by Susan Harris include:
Chaos Theory (Book One—May 20, 2020) Butterfly Effect (Book Two—Fall 2020) Additional novels in the series to be announced soon.

All vampire legends are turned on their heads as this heroine takes her broken life and heart, and learns to wield them as deadly weapons.

Ryan is a seventeen-year-old vampire, who is as determined and deadly as they come. Her mother and father died as personal guards of the King and Queen, and she will continue to fulfill their responsibilities and join the Royal Guard...even if she's only the second female vampire ever to accomplish this feat (her mother being the first). But as tough as her exterior is, she's shattered beyond repair inside. When the Crown Prince is sent on a mission among the humans in hopes of finding a way to save the slowly dying vampire race, Ryan is forced to watch over him. But what she saw as simple guard duty suddenly turns into not only a battle for life and death, but hidden secrets unfold, which might be enough to end them all.

The minute I saw the cover, I wanted to get my hands on this book, and I'm glad I did. It's been awhile since I've hit a vampire read, and this one wasn't only refreshing but held me in the pages from beginning to end.

Ryan has a very troubled past and carries the baggage around to the point where her personality is so harsh, she borders are being annoying . But there's a spark of justice and longing in her, which make her hard not to root for...and eventually like quite a bit. She is a tough, kick-butt heroine, who can more than hold her own in any fight. While this isn't usually my favorite character type, the fact that she's a vampire with super strength made it, at least, easier to swallow. But then, it is fun to have her fly through those action scenes, and there are plenty of those.

While Ryan's big problem lies in trying to accept her past and find away to live again, the plot rushes along on its own, quick-paced path. There are vampire attacks, murder, mystery and tons of secrets waiting in the shadows—all those things a vampire novel should have. But this one also packs a bit of royal drama, beginning romance, and a little college drama, making it a nice fit for the young adult audience, who likes a building, teenage romance to flow along with the harder action. (Also, trigger warning: there is also the beginnings of a possible rape scene, but only the start, and there aren't any graphic moments.)

While the entire book builds and hints at an exciting and deep evil intrigue in the future series, the ending seals it with a bang. This part came very unexpected, and if I had thought that the drama aspects might be getting a little thick, the last scenes made it clear that there is much more excitement to come. And not a subtle kind.