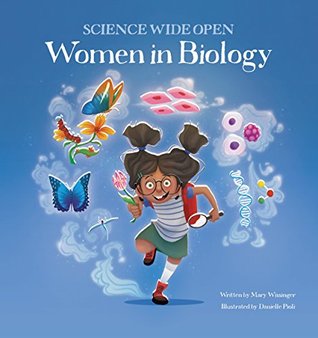 
Take a peek inside the mysterious world of living things! Women in Biology follows a conversation between an inquisitive young girl, whose curiosity prompts her to ask questions about the world around her, and a scientifically astute narrator, whose answers are crafted to be both accurate and approachable to a young mind. In this way, learning the basics of biology becomes an effortless outcome of enjoying the story.And just as important, these science concepts are explained through the research and advancements of numerous inspirational women who each changed the world with their scientific discoveries. This fun story of biology is a perfect place for young scientists to start their own journeys of discovery and wonder.Women in Biology is Book 1 in the science-based series called Science Wide Open. This series explains and teaches some basic concepts in biology in simple and memorable terms through the natural questions and curiosity of a young child, while also highlighting women scientists throughout history and some of their mind blowing scientific advancements. These women include Hildegard of Bingen, Barbara McClintock, Maria Sibylla Merian, Jane Wright, and Linda Buck.

MY TIDBITS
Science becomes understandable and fun in this series, which centers also on female scientists and their contributions.
Starting with the simple question and answer to what biology even is, this book dives into simple cell, DNA and gene explanations and takes a look at the very basic end of biology. It goes through five female scientists (biologists) and very briefly explains what they did and their discoveries. But this book isn't as much about these personalities as it is about giving the very fist introductions to biology in a way young readers can understand.
This is a small book without nearly as much text as I thought it might have, when I discovered the intended age group (ages 7 to 10). Every page is filled with bright and bold illustrations, which not only entertain but, especially toward the end of the book, assist in making the more scientific explanation understandable. The text is written for a fairly young audience, and I'm not sure that those eight and older won't feel talked down to. But the material and explanations are definitely not for the younger age group and slide nicely into this age group. So, it's a slight mix on that end.
I enjoyed that the scientists weren't dryly added in, but rather, are mentioned as their discoveries fit with the topic. The book doesn't concentrate on each woman so much as add in what their discoveries did and how they were important...in an easy to read and non-boring manner, too.

And here they are...
The Author
Mary Wissinger spent most of her childhood in Wisconsin singing, reading and daydreaming. A former teacher, she enjoys writing sotries that inspire curiosity about the world and connection with others. Now a St. Louis, MO, resident, she is the author of the entire Science Wide Open series: Women in Biology, Women in Chemistry, and Women in Physics. More information about Mary can be found at www.MaryWissinger.com

The Illustrator
Danielle Pioli is an artist and illustrator whose mission is to inspire others to create. The idea of creating a whole universe from her mind to paper is what made her fall in love with art and storytelling. As a child, she was drawn to magic—what she now calls Quantum Physics. She is the illustrator of the entire Science Wide Open series. For more information on Danielle's work, you can visit her website at DaniellePioli.com.
on November 19, 2020