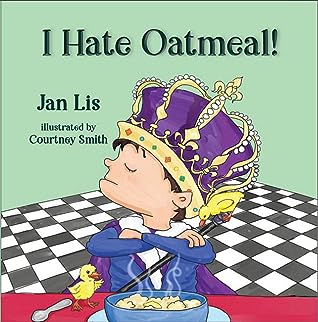 I HATE OATMEAL!
by Jan Lis
Illustrated by Courtney Smith
Elk Lake Publishing
Picture Book
46 pages
ages 4 to 8
A delightful book for picky little eaters.Timmy refuses to eat his oatmeal. Mother tries to make his cereal look yummy, with no luck. See what she does with the oatmeal and how Timmy reacts.

MY TIDBITS
This one caught my eye thanks to the title combined with the wonderful crown...so true for some of those early, picky eaters!
Timmy will not...under any circumstances...eat his oatmeal. Mom goes to all lengths to add the extra something, which will make that oatmeal more enticing. Day after day, she does her best, but Timmy is not to be swayed. Then, she does something unexpected and his attitude might just change.
I know I was not an oatmeal fan when I was younger, so for me, Timmy was very easy to connect to before this book even started. My kids thought so too. But even they had to admit that with everything the poor mother tried, it was getting to be a bit much.
The author does this with a sense of repeat. Every morning, Timmy comes in and refuses to touch his oatmeal, and every day, the mother does something to spice things up. At first, I thought there was a printing mistake since the story really repeats itself, but then quickly realized what was going on. The sense of him doing the same thing day after day hits even with younger readers in a way which starts to make Timmy's dislike seem more and more tiring...much like it should for the mother. So, this was really well done in its monotony.
The illustrations really caught my eye. They are detailed, very brightly colored, and while portraying things realistically, throw in an unexpected, artistic flair, too. I enjoyed the originality and was very surprised by the mother's outfits and 'personality'. It's definitely something which sticks out and will catch kids' attentions.
At the end of the book, there are question to open up discussions about the tale. These ask readers about what they say or happened in a game-like fashion. It helps to make the message clear without coming across preachy.
You can find out more about the author...