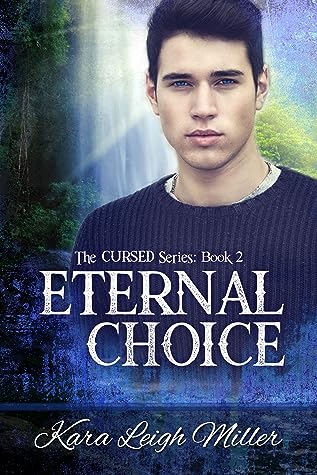 Forced to move to California with her father, the same man who abandoned her ten years ago, Chloe is once again starting over. Only this time, she has a perky new stepmom and an annoying baby brother. To make matters worse, the sea of snobby rich kids at her new prep school pretend she's invisible. As if all that wasn’t bad enough, she has this gnawing sensation that she’s forgetting something important.

And then Trent Halstead crashes back into her life, bringing with him everything she's forgotten and the devastating news that there’s a coven of witches after her, and no one knows why—until Chloe discovers the answer in a box of old family photos. Now, she's keeping a secret that could save Trent's life. There’s just one problem: his salvation will come at a cost. Her destruction. And that’s a price she’s not sure she’s willing to pay.

**Eternal Choice is the exciting sequel to Eternal Curse.**


BOOK DEPOSITORY / GOODREADS / B&N / AMAZON / KOBO
MY TIDBITS
Vampires and witches intertwine with curses and a bit of romance in a read, which never offered a boring moment.
Chloe's not happy. After her mother passed away, she's forced to move to California to live with her father and new stepmother, leaving every friend and loved one behind. But she turns eighteen in another month and is determined to use that to move back to the life she loves. In an attempt to appease her father and step-mom, she agrees to start tutoring, but the student she gets is packed with secrets. When she meets his brother, strange flashes of what appear to be memories have her realizing there's more to her life than she thought. Soon, she discovers everyone has been keeping information from her, the kind which will edge her closer and closer to a choice between life, death, and love.
I did not dive into book one first but headed straight into this one. And that wasn't a problem, at first, since Chloe starts a new life in this book in almost every way. Even her own past doesn't play a really huge role until about mid-way through the book. When her world flip-flops, however, it would have been nice to have read the first book first, since I did find myself playing catch-up. But even that wasn't a huge problem, and I enjoyed this one the entire way through.
This has a lot of teen drama. Chloe hates her new life in California, misses her mother, misses her friends, deals with school like an outcast and yet, ends up with the hottest guy there chasing after her. So, cliches are in full spin during the first part of this one. And she acts like a teen with a bit of an attitude and lack of gratitude or understanding for her situation. Simply said, she came across a bit spoiled to me, especially since her step mom was very sweet and nice. That said, the book takes a very positive spin (on the intriguing plot end of things), when the two strange guys show up and start stalking her. Dark secrets and dangerous surprises  knock the cliche pretty much out of the tale and allow more and more excitement to settle in. By the end, the spoiled teen girl is gone and a much bigger problem lies in wait.
Fans of young adult urban fantasy with lots of romance...tip-toing into the reverse harem in some ways...will enjoy this one quite a bit.
on November 29, 2020