Review: The Dragon's Song by Binh Pham and R.M. Clark 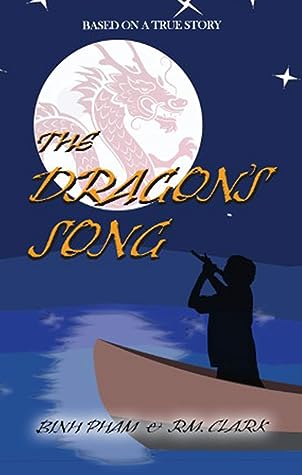 Eleven-year-old Bao Dang remembers watching in horror four years earlier as Communist soldiers dragged his parents from their home. Now an orphan, he begins a journey to escape the oppressive government of South Vietnam. The owner of a small boat, paid in gold, smuggles Bao and his cousin, Binh Pham, down the Saigon River at night to the South China Sea, where he and over one hundred other "boat people" pack into a trawler designed to hold fewer than thirty. For six days, they face danger from the police, weather, and pirates, not to mention the constant threat of capsizing as they take on water while living only on dry, rationed rice.Bao, Binh and the others hope a refugee camp in Indonesia accepts them, but there's no guarantee. Word has it they may be turned away and even towed back out to sea to starve. Eventually finding a safe haven, Bao harnesses the power of music to heal and help endure months of harsh and dangerous living while he and Binh await word from relatives in the United States, hoping they'll obtain the ultimate gift: freedom.

MY TIDBITS
I can't remember ever running across a book for middle graders, which tells the tale of a boy and his journey from South Vietnam to the United States as a refugee shortly after the fall of this country. That alone already struck my interest, but this one goes a step farther in so far that one of the co-authors lived this journey.
Bao's family's fears come to life when his parents are dragged off by the Communist police before his very eyes. He manages to escape to his uncle's home, where he lives for a few years before they're able to arrange for his escape (and that of his cousin's) to relatives in the United States. The journey not only places him in great danger, but he travels under the worst conditions, stuffed into 'hidden area's of cargo holds with many other refugees like him. During this journey, however, he also discovers a new talent of  his own.
Based on one of the authors' own experiences, this tale definitely will have young readers learning about the troubles people around the world face—in this case, a refugee trying to find a new home in another country, while escaping from the government of his own country. It's eye-opening and will definitely surprise readers at the circumstances and situations some refugees have faced to escape oppression. There isn't too much around the history of South Vietnam nor the more exact problems the people faced, which I did miss a little more about, but this definitely brings an important situation across that many readers of this age group will know little to nothing about.
This book isn't only about Baos difficult journey, although it is definitely powerful on this front. The authors keep descriptions appropriate for the intended age group, but that doesn't mean that the harshness of the experience is erased. The cramped conditions, fear, hunger, thirst, dirtiness, and danger are brought across very distinctly and will leave readers with more than a little food for thought. But this book also offers hope. Bao discovers his own talent for music, and this aspect adds a wonderful depth and emotional balance. It adds so much heart.
The writing is well done and allows every stage of Bao's escape to hit home. Still, I had trouble connecting to Bao. While the book starts with the horrid scene of him watching his parents being beaten and then dragged away, the reader is never given time to get to know Bao as a person first or even later before his 'escape' starts. While describing South Vietnam and the situation would be too much, at least a little about life would have helped: what the town looked like, what he played (he is a kid), what they wore or what was normal in their lives. Not getting to know Bao personally kept him at an arm length for most of the book.
Still, this is a powerful read in many ways and one that opens up readers to experiences they may not even know exist. It will open up discussions and will probably leave readers seeing the world in a slightly different way.
on November 02, 2020