Mish-Mash Day with Review #4 - The Sparks by Kyle Prue

It's Mish-Mash Day! And that means I'm digging through the books I've read 'unofficially' the last weeks and letting them have their day in the spotlight. Since this is pretty spontaneous, I've been surprising myself with what I have. I'm especially shocked to see that almost every single one is YA!
Anyway, I picked up this one in an entire trilogy set because I was desiring some more hardcore fantasy, which this tends to, at least. Since I've only finished up book one so far, here it is! 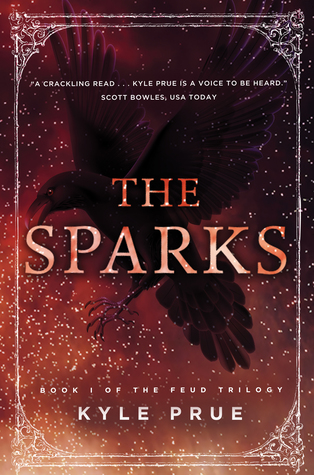 
One teen assassin-in-training must unite three warring supernatural dynasties before death comes to them all…Find out why USA Today calls The Sparks “a crackling read” that “builds a vivid world (both) otherworldly and relatable.”Neil Vapros just wants to make his father proud. The sixteen-year-old aspires to serve his family as an assassin, but he nearly dies in the process. As if that wasn’t bad enough, Neil’s family, as well as two rival dynasties, have abandoned an ancient promise to protect their city. An unknown evil has begun hunting all three houses from the shadows…As Neil’s relatives fall one-by-one, he attempts to unite the three supernatural families against a common enemy. But earning trust after years of assassination attempts could prove impossible. Neil’s fight may involve more than a bloodthirsty empire, as betrayal rears its ugly head…The Sparks is the first book in the award-winning Epic Feud trilogy of young adult fantasy novels. If you like captivating characters, inventive world building, and supernatural battles, then you’ll love Kyle Prue’s action-packed coming-of-age tale.Buy The Sparks today to ignite your thirst for adventure!

BOOK DEPOSITORY / GOODREADS / AMAZON / B&N
MY TIDBITS
Three families with magical powers, an evil emperor, a kingdom surrounded by walls, monsters outside, betrayal, secrets, greed, and mistrust all make this into a complexly woven plot and a rich, fantasy world.
Neil belongs to one of the three powerful families in the kingdom, one which was granted magical powers many years before. It's his job to be a socialite or, what he'd rather be, an assassin. Unfortunately, his father has no trust in his abilities as the later. Caught in a never ending feud with the other two families, Neil follows his father's orders to try to turn tables on the dispute. While he fails, his actions indirectly speed up another, unknown danger. Soon, the world as Neil and the families knows it falls apart, and Neil's dreams of being an assassin dim in the new danger he now faces.
While the blurb starts with the idea of a new assassin trying to make his way, this really doesn't do the tale even the slightest justice. This isn't about an assassin. It's about an empire, greed and warring families needing to find a way to deal with each other for other purposes. It's not even written from a single point of view. This tale weaves masterfully between families, characters and scenes, allowing different perspectives to tell the tale as it unfolds. Because it is so woven, it'd be impossible to do it any other way. And as a reader, I learned to like/hate every single character.
The world building is very well done as the kingdom and lives of these characters develops and changes. But it's a character driven tale, through and through. The survivors of the three families are young adults with determination, hatred, and powers they haven't completely grown into...but don't underestimate them, either.
The tale is very well done and doesn't leave a boring moment, while still building the needed background, world building and character depth. It's an adventure to get lost in, and every chapter brings something new.
I just finished book one and can't wait to hit book two.